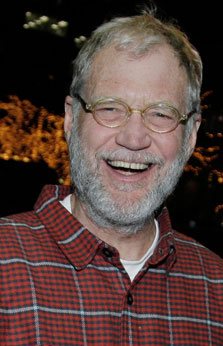 As we previously mentioned, the late night heavyweights have been angling to make a return in early '08. Letterman has been leading the pack by working on a deal with the WGA through his own production company, WorldWide Pants Inc. Yesterday they reached an agreement which will allow his show to return to the air next week, writing staff and all.

The independent agreement he made with the WGA "included provisions to pay writers for work distributed over the Internet -- presumably covering the large assortment of advertising-supported video clips of Letterman's show that CBS posts on its Web site." Since WorldWide Pants owns The Late Late Show with Craig Ferguson, a similar deal was struck for that show. Upon reaching the agreement, Letterman said he was "happy to be going back to work, and particularly pleased to be doing it with our writers. This is not a solution to the strike, which unfortunately continues to disrupt the lives of thousands. But I hope it will be seen as a step in the right direction." What does the WGA have to say? We received this statement from them last night:

“The Writers Guild has reached a binding independent agreement today with Worldwide Pants that will allow the Late Show with David Letterman and The Late Late Show with Craig Ferguson to return to the air with their full writing staffs. This is a comprehensive agreement that addresses the issues important to writers, particularly New Media. Worldwide Pants has accepted the very same proposals that the Guild was prepared to present to the media conglomerates when they walked out of negotiations on December 7.

Today’s agreement dramatically illustrates that the Writers Guild wants to put people back to work, and that when a company comes to the table prepared to negotiate seriously a fair and reasonable deal can be reached quickly."

In addition, the WGA's East Coast President, Michael Winship, wrote the following to the Guild last night: "The AMPTP has not yet been a productive avenue for an agreement. As a result, we are seeking deals with individual signatories. The Worldwide Pants deal is the first. We hope it will encourage other companies, especially large employers, to seek and reach agreements with us. Companies who have a WGA deal and Guild writers will have a clear advantage. Companies that do not will increasingly find themselves at a competitive disadvantage. Indeed, such a disadvantage could cost competing networks tens of millions in refunds to advertisers."

As for the others, Leno and Conan plan to return January 2nd (as of now, without Guild writers) and Jon Stewart and Stephen Colbert plan to follow with a January 7th return. The latter will have the toughest time since his show is mostly scripted. WGA spokeswoman, Sherry Goldman, stated: "We don't know how he's going to do it, and I'm not so sure that he's figured it out yet." But the big question is: will they keep their strike beards?! Conan recently told the New Yorker: “Let’s get these writers a fair shake or this beard stays.”

Photo of Letterman with strike beard via NY Post.