WeWork's "WeLive" Apartments Will Let You Rent A Fold-Away Bed Behind A Curtain For $1,375

WeWork, the international co-working startup recently valued at $16 billion, announced in January that 20 floors at its 110 Wall Street location had been converted into fully-furnished apartments for the app creators to whom they cater. At the time, the company dropped juicy hints about the amenities that lubricate a life probably spent full-time disrupting: on-site yoga studio and movie theater; laundry, cleaning and utilities included; a "community manager" to organize building-wide karaoke. The cost of living this way was demurely withheld.

Now the apartments are officially on the market, and WeWork has confirmed that all of this can be yours for as little as $1,375—if you're willing to sleep in a fold-out Murphy bed, behind a curtain, in the living room. Or, if you'd rather not lift your bed into the wall every morning, an alcove bed niched into the living room with a privacy curtain.

Studios, and by extension privacy, cost from $2,000, not including the $125 monthly amenities fee that lumps in cleaning and laundry, but also all of the things that WeLive doesn't expect you to acquire for yourself: coffee, San Pellegrino, Smart Water, bitters, cups, spoons, forks, toiletries, furniture, sheets, clothes hangers, cable, and internet. There's also an inter-building app for requesting a babysitter or a PR logo from your upstairs neighbor, a la this dope building-wide Slack channel. Here's a taste, courtesy of Forbes:

A walk through WeLive feels like a stroll through a millennial office worker Narnia, from the lounge spaces with bar areas (providing all the bitters and shakers a wannabe mixologist would need) to the laundry room that looks more like a game room with ping pong and billiards, to the roof deck complete with jacuzzi that’s opening soon. There’s a wellness room for yoga and Barre classes and an “honesty bar” stocked with basic toiletries.

And the apartments are small—450 square feet on average—apparently to encourage people to spend minimal time away from the daily grind of networking in the communal kitchen-dining rooms (one for every three floors, which are clustered together in so-called "neighborhoods," each with their own laundry-game room and barre-yoga studio). 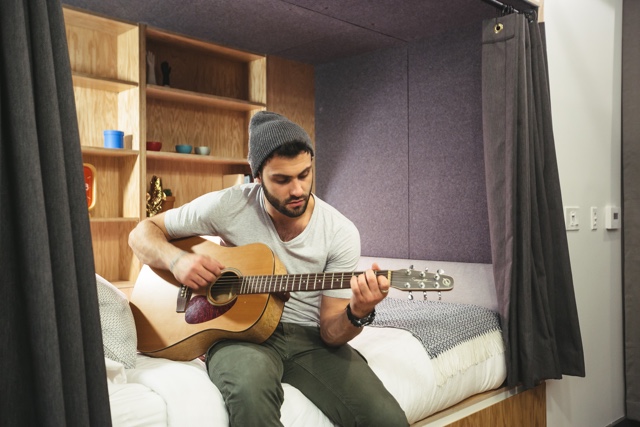 "WeLive replicates the security and comfort of a suburban neighborhood but with the energy and vigor of a major city," said the company in a statement.

A spokesperson for the company confirmed that you don't have to belong to WeWork ($325/month for dedicated desk space and benefits) to live at WeLive, although if you do, that's a plus. Leases are available month-to-month, as well as in six, 12, and 24 month contracts. Background checks, yes, but no brokers fees or credit checks.

As for the neighbors, "We are happy if there are some bros here having a good time," WeWork cofounder Miguel McKelvey told Forbes this week. "But there will also be people here eating wine and nice cheese and watching The Bachelor, too. It'll be diverse, and if we do our job, it will stay that way."

WeWork was hammered with bad press last year when about 150 of its non-union office cleaners protested making as little as $10/hr and were subsequently fired. The startup has since established a living wage of $18/hr for its cleaners, hired some of the old workers back, and pledged to work with union subcontractors.

Correction: An earlier version of this piece incorrectly stated the price for desk space at WeWork.

#disrupt
#Murphy Bed
#wall street
#WeLive
#wework
#original
Do you know the scoop? Comment below or Send us a Tip