Wet Outside When Fronts Collide 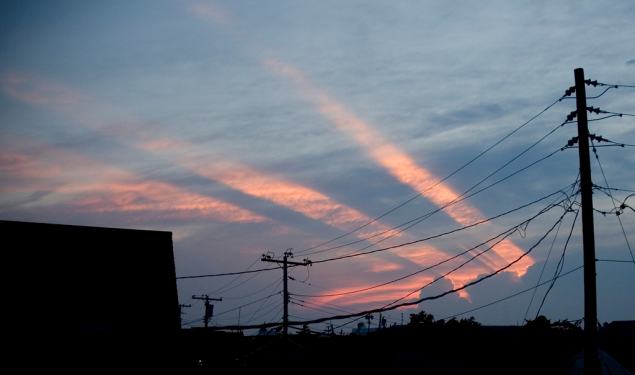 Sunset Streaks by ixtayul on Flickr
An entertaining, and possibly very wet, weather situation is developing for today. Normally, synoptic scale cold and warm fronts that stretch for hundreds of miles don't collide with one another. They are just the boundaries between colliding blobs of air. A tired old cold front sits just to the west of the city this morning. Acting alone the front might kick off a few showers as it slowly crawls eastward, finally passing through the city tomorrow afternoon. However, the tired cold front won't be acting alone.

A weak high pressure system over the city means conditions are favorable for the development of a sea breeze front later today. During the day the land will heat up faster than the ocean. Hot air over the land will rise and the cooler air over the ocean will flow inland to replace it. As this sea breeze front moves north and westward and the old cold front moves eastward, the warm, humid air between them will be pinched in a meteorological death grip of sorts. The only escape will be to keep moving upwards, and thus unleashing all that moisture upon the city. Hence, a flash flood watch is in effect through this evening. Expect showers and thunderstorms, likely with very heavy downpours, some with small hail, until at least sunset. Clouds will keep today's high under 80.

Showers and thunderstorms may linger through the day tomorrow, so you may want to stay inside and watch the Weather Channel's first sitcom. The chance of a shower won't be as great and the rainfall shouldn't be as intense as today. The old cold front should finally pass through town late tomorrow. That passage will bring a sunny and warm Sunday and Monday to the city, expect highs in the mid 80s both days.

#downpour
#flash flood watch
#rain
#sea breeze front
#showers
#weather
Do you know the scoop? Comment below or Send us a Tip