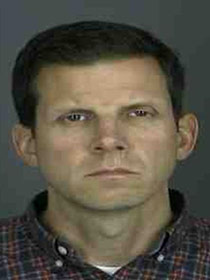 Whalen, 45, was a band teacher at Crompond Elementary School in Yorktown Heights but had been on leave after being arrested for alleged child pornography possession and distribution in October. According to the Journal News, the Westchester DA's office alleged that Whalen "possessed and shared an obscene video of a child that appeared to be between 8 and 10 years old around Aug. 27 on an online file-sharing network." The allegations disturbed parents deeply.

State Police said that hikers called 911 on Saturday afternoon after seeing someone fall off a cliff. Lt. Drake described, "They heard what they thought was a loud crash and when they looked up they saw somebody come tumbling down. Unfortunately, when they had come upon the person that had fallen from the cliff, they tried to attend to him and conduct CPR but to no avail the person succumbed to their injuries."

He added, "The investigation indicates this 45-year-old gentleman was on the trails by himself he had taken some photographs and he was in the midst of doing some hiking on the trail heads and got too close to one of the edges of the top cliff here in Gardiner and lost his footing."

The authorities believe Whalen's death was an accident. The Yorktown Heights superintendent emailed families saying that it was with "sadness and a heavy heart that I notify you of the news of the accidental passing of Mr. Jeffrey Whalen, which occurred yesterday after a tragic fall while hiking. We will have a crisis team available to deal with any of our students who are in need of our support. Please keep the Whalen family in your thoughts and prayers."