NYC's bike share program is coming! And with the July launch of the hyped program inching closer—it kicks off with 10,000 bikes in 600 locations—it is time to start seriously talking about where exactly all those bikes are going to go. 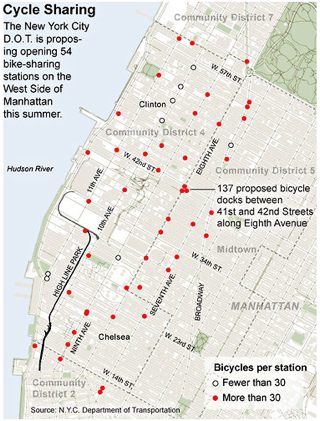 A rough idea of where bike share stations will go this summer (NYT).

For the past few months the city has been talking to locals about where they want the share stations to live, and now we are getting closer to finding out where the winner locations will be. Because clearly the city can't put a station in every location that residents have suggested in the city. You wouldn't be able to cross the street!

To give some additional sense of what is coming, the Department of Transportation provided a preliminary map of the kiosks coming to Community Board 4 on the West Side of Manhattan and the Times went and mapped it up. And it pretty much makes sense. Some areas will be well saturated with bikes (there are 137 docks planned for Eighth Avenue between 41st and 42nd Streets) and some (like 10th Avenue between 45th and 55th Streets) less so. At least initially. All depends on how they are used.

All in all, what this really does is just get us pumped for the program to start rolling. Because once people are using the share program, the city will almost instantly have a clearer sense of who is using the program, and where the bikes are needed the most. And when! Keeping bike share racks clear in the mornings for incoming share bikes and full in the evenings for leaving workers in places like the Port Authority is going to be an interesting (and tricky) job.

#bicycles
#bike share
#bikes
#department of transportation
#dot
#manhattan
Do you know the scoop? Comment below or Send us a Tip