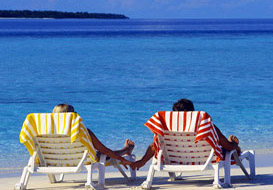 Marina Gavrielova's husband makes about $98,000 a year as a limo driver and owns a nice house in Jamaica, Queens, where the couple resides with their three children. But according to prosecutors, Gavrielova duped various city, state and federal agencies into believing she was single mom living in Brooklyn, earning just $200 a week at a nail salon. With her husband posing as her landlord, Gavrielova, a licensed cosmetologist, allegedly bilked the system out of $360,000 in welfare benefits, which helped fund trips to Cancun, the Bahamas and Jamaica.

But don't tropical vacations benefit one's mental welfare? No-nonsense Brooklyn D.A. Charles "Joe" Hynes doesn't think so, and the couple now faces up to 15 years in prison welfare-fraud charges. Hynes also announced three other indictments for fraud yesterday. A banquet server at the Westin Hotel who made over $200,000 a year is accused of supplementing his income with $37,000 in Medicaid benefits. Another alleged Medicaid cheat, 33-year-old Shalom Mizrahi, received $34,000 from the agency despite owning a women's-sleepwear company with $2.5 million a year in sales.

And prosecutors say 41-year-old Richard Greenstein collected over than $89,000 in food stamps and Medicaid benefits. His occupation? A real-estate title-insurance sales executive with a yearly salary of $300,000. The Post piquantly notes that Greenstein arrived for his arraignment in a bloody Jaguar driven by his brother-in-law.

#arrest
#brooklyn
#food stamps
#fraud
#indicted
#welfare
Do you know the scoop? Comment below or Send us a Tip