Welcome To The Working Week: NYC Has Worst Commute In Nation

We already had an inkling that commuting in NYC was probably a bit worse than in other cities, but a new study really seals the deal. Comptroller Scott Stringer has released a study comparing New Yorkers' commuting times to 29 other major America cities, only to find that we have the worst working week commute in the country by far. As Elvis Costello once said, I know it don't thrill you, I hope it don't kill you.

"When asking a friend or acquaintance about their decision to leave New York, it is common to hear about a desire to 'live at a slower pace' or to 'leave the rat race.' In other words, they express a desire to spend less time working and commuting and more time on other aspects of life," the report begins. While we're prettttttty sure that friend-in-question really doesn't want to have to race any more rats (or have them sit on his face), the point is clarified with many of their statistics: NYers spend an average of 49.1 hours a week getting to and from work, they spend an average of six hours and 18 minutes commuting over the course of a week, almost an hour more than the next runner up, Chicago. 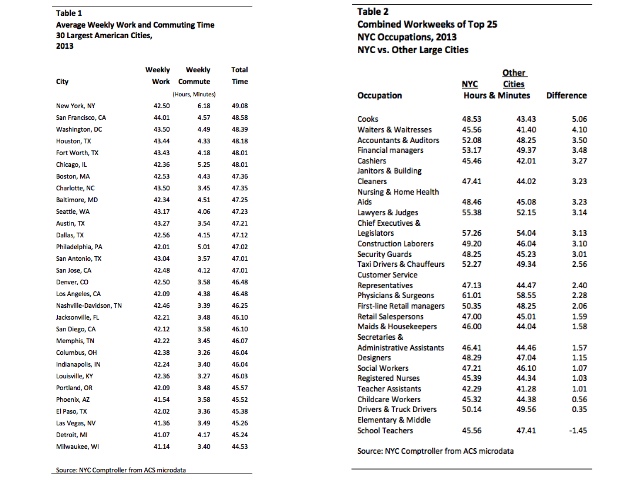 Two graphs from the study

"New York is America’s hardest working city, but it’s a one-two punch for lower wage workers, who get paid less and travel longer to get to work," Stringer said in a release alongside the study. "This means employees in the Big Apple get paid less than it appears on an hourly basis, because their commutes are significantly greater than anyone else in the country. New Yorkers are dedicated, ambitious and tough, but to compete in the 21st century we need to expand our transit networks and advance policies like flexible work arrangements and predictable scheduling."

Some more takeaways from the study:

John Raskin, Executive Director of the Riders Alliance, issued a statement about the report:

Thanks to Comptroller Scott Stringer for crunching the hard numbers to prove what subway and bus riders know from experience: New Yorkers have increasingly long commutes, and low-income workers are suffering the most. To make matters worse, the MTA’s own data show that delays are up and getting worse, a direct result of having old and outdated equipment that is prone to breakdowns and failure.

If you work as a high-paid professional, poor transit service is inconvenient and costly. But if you work as a home health aide or security guard, poor transit can mean missing a day of work or losing a job altogether. Low-income New Yorkers have the most to lose from underinvestment in public transit, and the most to gain from a transit system that is reliable and comprehensive.

If Governor Cuomo and state lawmakers fund the next MTA capital program, riders will see real improvements that help them save time and money. If our elected officials don’t fund the capital plan, we’re looking at worse service, higher fares and longer commutes for everyone who rides public transit.

You can peruse the whole report below.

#commute
#commuting
#scott stringer
#subway
#travel
Do you know the scoop? Comment below or Send us a Tip