Anthony Weiner doesn't want to talk about that photo anymore, so much so his office will call the cops on you if you try and make him. A week after a crotch-shot appeared on the married Congressman's Twitter feed, Weiner's "certitude" regarding his junk is still national news, as much as he and the 21-year-old co-ed who the image was directed at wishes it weren't. At least we've all learned a lot about the "confident security" provided by those $11.25 Jockeys.

Weiner made it clear that he was done talking about the issue and wanted to get back to work, but that didn't stop CBS 2 from sending a reporter down to DC to try and get him to "speak to his constituents." However rather than talk to Marcia Kramer, the Representative's office told her that Weiner had already spoken for nine hours the day before and was done. And then they called the police to make sure that Kramer and her crew left. Because calling the police over a reporter in your office but not over a hacker in your computer is a great way to get your embarrassing story out of the news! 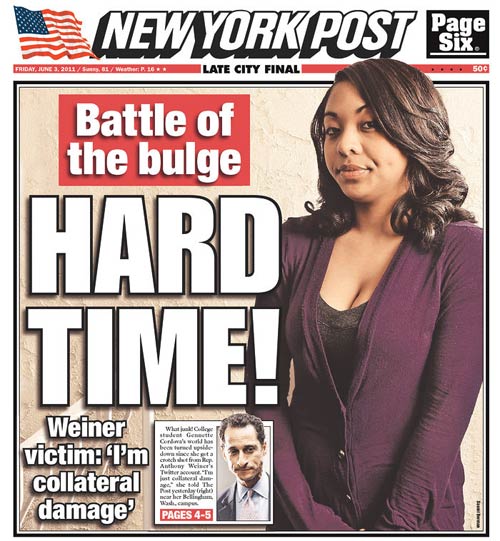 While that was going on, the Post sent a photo crew out to Washington to meet the co-ed at the eye of the storm, 21-year-old Gennette Cordova. "I'm just collateral damage," she told a reporter, while taking glamour shots for the tabloid. "I just want to get on with my life," she said, before complaining that she hadn't slept much ("I've just been constantly monitoring what's being said about me. It's crazy."—oh, hi Gennette!).

Cordova is in the middle of finals (though she's dropped some classes) and plans to work as a restaurant hostess or law firm assistant this summer. Maybe she can get a gig at the firm Weiner recently hired, Baker & Hostetler?