Weiner: I'm Sorry But I'm Done Talking About The Sexting

Former Congressman Anthony Weiner has more than $4 million in leftover donations gathering dust around in a campaign war chest, and it looks increasingly likely he's going to pump it into a campaign for mayor of New York City. In what appears to be a carefully-orchestrated media roll-out, Weiner gave his first television interview to NY1 last night. The Park Slope native deflected questions about the humiliating Twitter scandal that drove him from office, insisting he'll continue to say he's sorry but would rather not talk about what he's apologizing for:

Louis: How many people were involved that you were sending these inappropriate messages to?

Weiner: Let me say this, here is what I think people need to know. I did these inappropriate things and sent these inappropriate messages with more than one person, several people. And I have been excruciatingly honest, in letter by letter, detail by detail, with my wife. And frankly, a lot of these things are in the public domain. An embarrassing amount is in the public domain. But out of respect for the idea that I've laid it all out for her and out of some respect for the privacy of the people who were at the other end of these correspondences, who had their lives turned upside down, I am not going to go into the details of every bit of it. I'll let other people do it.

Louis: Let me then just ask you the three questions that I think are most on people's minds and the sort of minimum that people need to hear. You said "several." That's, what, that's less than 10? "Several" is a few. It's not 60, it's not 100. Less than 10?

Weiner: That is exactly what I was talking about. I understand that you are asking these questions. I don't want to create a dynamic where the privacy of people is being impinged upon.

Isn't that thoughtful of him? Pressed further on the number of people he sexted, Weiner referred back to a previous estimate of six. He insists that none of his, uh, correspondents were underage, and he stressed at the outset that "I'll be spending a lot of time, here on out, saying I'm sorry." 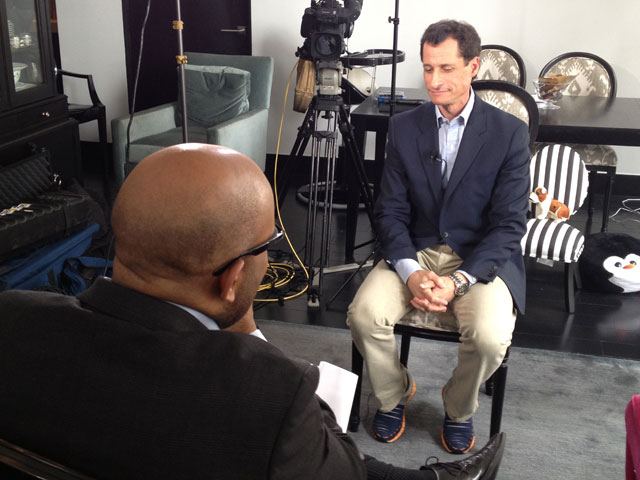 On the subject of more substantive issues, Weiner distanced himself from other Democrats by announcing that he's opposed to creating an Inspector General for the NYPD. He also said that while he believes the NYPD's controversial stop-and-frisk program could benefit from transparency, he thinks "it would be a mistake to eliminate" it.

"I expect that the first poll that comes out including Anthony will have him in second place,” Jonathan Prince, the chief campaign strategist for candidate Bill Thompson, tells the Times. “He’s got 100 percent name recognition — nobody else comes close to that." On the other hand, Sal F. Albanese, a Democratic candidate who was on the City Council with Weiner in the '90s, tells the Times, "As a mayor, I think he’d be a disaster, quite frankly. If I did something like that, you wouldn’t see me back in government. I’d be in a monastery somewhere."