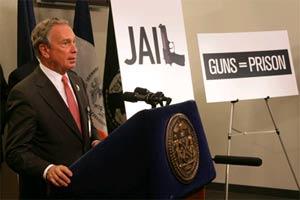 Last week, the Mayor and other city officials announced a new public service campaign to highlight the new penalties for illegal gun possession in New York, such as longer mandatory minimum sentences of 3.5 years. Citizens Crime Commission of NYC president Richard Aborn said during the press conference, "Almost 70 percent of murders in New York City are committed with firearms and the vast majority of those weapons are illegal." As it happened, there were many shootings this past weekend:

- A 10-year-old boy at a playground near the Samuel Gompers Houses at Pitt and Rivington Streets was shot last night around 10PM. The boy, who was shot in the arm, is in stable condition, and the Post and Daily News both characterize the wound as being from a "stray bullet." A witness told the News, "He wasn't the target. They were shooting randomly," as at least three shots were heard. Another witness told the Post the boy's mother went to help him, "screaming, 'Animals! Animals!'... He's a little kid. It's such a stupid thing." The police are looking for suspects. The 7th Precinct is actually just a few blocks from the Samuel Gompers Houses down Pitt Street.

- A man was killed during a traffic dispute in Fort Greene around 330 Hudson Walk. The NY Times spoke to the mother of Edwin Roman, who said that a car cut off her son around 4AM yesterday morning. Roman and the other car's driver got out and argued, only for the other driver to take a chain from Roman and then shot him.

- Twenty-four-year-old Marcos Cateyano, who was a maintenance supervisor at the Police Athletic League, was shot dead while another man was injured during shooting at the Riverdale Housing projects in Brownsville. Cayetano and Javier Figueroa were cleaning up after a party around 5AM yesterday when the shooting began; according to the News, they "were inside a tunnel that runs from the courtyard to the street." A woman said one of the bullets made it to her 5th floor bedroom, "Right now, I'm in fear, and I want to know how to get out of this place."

- And the police arrested a 17-year-old who was shooting at someone else before firing at cops Saturday night. Newsday reports that two police officers on foot patrol around Sutphin Boulevard and 122nd Avenue in Jamaica "when they happened upon Smith and the other male firing at one another." Smith fired his gun at the police, prompting the officers to return fire. Smith was arrested and charged with a number of crimes, including attempted murder. The NYPD will further investigate the circumstances of the shooting, including "how many rounds were fired by police and Smith, and whether the other man fired at officers."

Last day to weigh on on Congressional maps, but the chaos is just beginning
Gwynne Hogan and David Giambusso