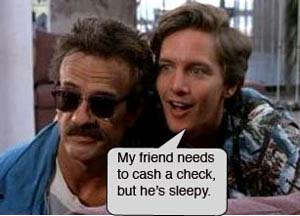 James O’Hare and David Dalaia, both 65, were arrested after they wheeled in the corpse of O'Hare's roommate to a check cashing office, attempting to cash in O'Hare's dead roommate's Social Security check. With a roommate like this...

Virgilio Cintron had died (of natural causes) at age 66 on Monday in the Hell's Kitchen apartment he shared with O'Hare, who would have been well-aware of Cintron's $355 check. He and Dalaia tried to dress Cintron, but could only manage to put his pants on halfway (they threw a coat on his lap) and seated him in an office chair.

They wheeled him onto the streets and took the check to the Pay-O-Matic where Cintron usually cashed in his check, leaving the dead man on the sidewalk. The clerk, who usually cashed Cintron's checks, asked where Cintron was, so the pair went to retrieve him. Only, by then, a crowd had gathered and the police were on their way, as a detective having lunch at a restaurant had seen the daring duo wheel the dead.

One witness said, "He was sitting in the chair with his head in the back of the chair. From where I was looking he appeared to be dead." And police spokesman Paul Browne said, "Hell’s Kitchen has a rich history, but this is one for the books.”

O'Hare and Dalaia may face check-cashing fraud charges. Are there charges for not reporting a dead body?