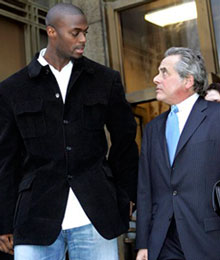 A week after Giants star Plaxico Burress shot himself in the leg at a Manhattan nightclub, the Associated Press has put together a narrative of what happened. It starts Burress (pictured, at right, with lawyer Benjamin Brafman) and teammate Antonio Pierce's arrival to the LQ nightclub in a Cadillac Escalade:

Burress bypassed the line of patrons and got into the club despite the semiautomatic gun in his [track] pants and ordered a drink.

Around 1:50 a.m., as Burress fumbled with the glass in his hand, the .40-caliber Glock slipped down his leg, and as he grabbed at it, he accidentally pulled the trigger and shot himself in the thigh

It ends with fallout from the apparent cover-up by the hospital that treated Burress and by the Giants and includes details like how an LQ bouncer asked PIerce what he wanted to do with Burress's gun (Pierce put it in his glove compartment).

While the NYPD groused that it learned about the shooting by watching the news, the NFL seems to recommends that its players contact their teams before the police if trouble arises. Former Giants cornerback Jason Sehorn told the Post, "Why would you call the police? They're not paid to help you. They're paid to arrest you, to book you." 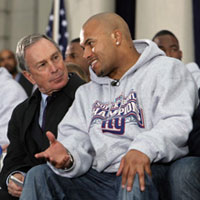 Well, the police have booked Burress--not to mention the fact that the Manhattan DA's office charged him with felony gun possession. Mayor Bloomberg, who earlier said Burress should be "prosecuted to the fullest extent of the law" (which means a minimum 3 1/2 year prison sentence if convicted), emphasized on Friday, "I'm not picking on Plaxico, I don't even know if I met the guy. But the bottom line is that the law should apply to everyone. To take a gun into a crowded nightclub where people drink and push each other around. There's a reason for this law. It is to convince you to not do this. There's nothing to do with him." Someone Bloomberg has met: Antonio Pierce!

And the Daily News' Mike Lupica offered some deep thoughts in his column regarding gun-toting celebrity athletes, "So why doesn't Jeter need a Glock when he goes out to a club when the Yankee game is over? How come A-Rod doesn't need a Glock when he's sneaking into Madonna's place?"