Three years ago, Jamie Powlovich met her now-fiancé outside the Prospect Park Boathouse for their first date — a picnic in the park, between his home in South Slope and hers in Prospect-Lefferts Gardens.

So when the couple planned for their 75-person wedding to be held at the historic boathouse in October, it had "sentimental value," Powlovich said. But the Boathouse didn't come cheap: the couple paid around $13,000 to secure the location via the site's official caterer and event planning group, The Movable Feast.

Now, that money may have vanished.

The owner of the catering company that exclusively provides services for weddings and events at the Prospect Park Boathouse has disappeared — leaving families in the lurch and possibly out tens of thousands of dollars.

Powlovich and one other bride-to-be shared emails they received earlier this week from the director of rentals at the Prospect Park Alliance, which manages the park, reading, "We have been unable to contact Movable Feast, the caterer for private events at the Boathouse, and it is unclear at this time as to Movable Feast's ability to fulfill their contractual obligations to its clients and to Prospect Park Alliance." 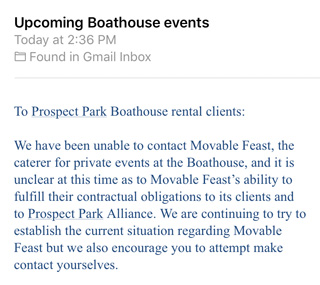 Excerpt of email from Prospect Park Alliance to couples

"We are continuing to try to establish the current situation regarding Movable Feast but we also encourage you to attempt to make contact yourselves," the director of rentals, Christina Kuhn, wrote in the email.

By all appearances, the catering group has closed down completely. Two phone numbers listed for the company have been disconnected, and a call to owner Jackson Berson's cellphone went straight to a voicemail message saying his inbox was full. Another number listed for him rang without anyone picking up or the call going to voicemail.

Additionally, a sign on the door of the Movable Feast office in Windsor Terrace reads, "NOTICE UNTIL FURTHER NOTICE THE MOVABLE FEAST IS CLOSED DO NOT ENTER THIS BUILDING," and another notice directs inquiries to Berson. Emails sent to two of his listed email addresses bounced back, and he did not respond to emails sent to two other addresses he's associated with.

Jessica Giantonio, an account director at a software company, booked her September 29th boathouse wedding last fall, with software executive James Kurz. Giantonio said they put down a $12,000 deposit and had been in touch with a Movable Feast event planner until this week, with a walk-through scheduled for this Friday. But on Tuesday, they received the alarming email from Kuhn. When they followed up with their planner, the received an auto response saying the woman no longer worked for the company and to direct inquiries to Berson.

Not content with this, the pair drove from their home in Carroll Gardens to the caterer's Park Slope office, where they were greeted by the closure signs. After ringing all the buzzers, a man who Giantonio said identified himself as Berson's father-in-law came downstairs and said that Berson was in the middle of a divorce and had left his wife and children "a couple of weeks ago." Attempts to reach Berson's wife were unsuccessful.

The sudden turn of events came as a shock to the couple, who were already stressed by the wedding planning process.

"Our families are very supportive. They've said they'll help however they can," Giantonio said. "I think my fiancé and I are the most upset. We feel like we got scammed. It's a very important day involving a lot of money. We just feel like this is the worst thing that could happen."

Powlovich hadn't heard from Movable Feast for several weeks after she had emailed them with a question about the planning process. When she received the Alliance's message on Monday, she was "devastated" and described it as "every bride's biggest fear."

"Me and my partner have been together a while and we have two children, and so this is something we really had to save up for and plan for," Powlovich said. 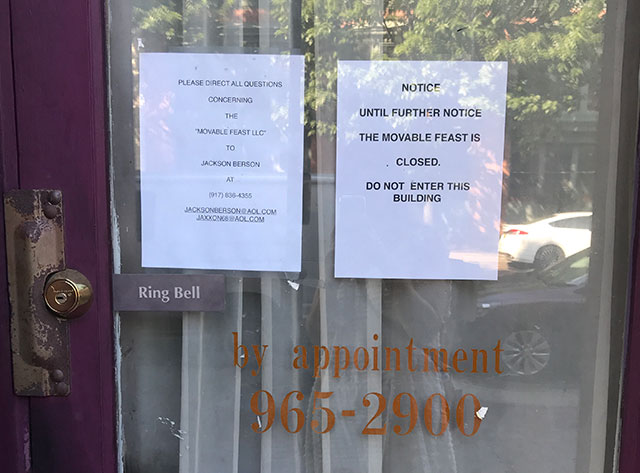 Signs on the door of Movable Feast (Courtesy of Jessica Giantonio)

The couple has reported the $13,000 in charges for the wedding as fraudulent to their credit card company, and are hoping to recoup some of the money that way.

But beyond the money, Powlovich is concerned about what it will take to start from square one.

"We just want to get married. We don't need a big fancy show," she said. "But, you know, weddings are a lot of work. When you've been planning one, it's a lot to start over."

In a statement, Prospect Park Alliance spokeswoman Deborah Kirschner wrote that the organization was "currently attempting to clarify the status of Movable Feast, which has successfully catered weddings at the Boathouse for over 20 years. In the meantime, we are working with existing clients of Movable Feast to connect them with caterers that can accommodate their event."

The privately run, donation-driven Alliance manages the park and has been the primary point of contact between spouses-to-be and Movable Feast. The Parks Department declined to comment, though a spokeswoman confirmed that the caterer has no formal contract with the city.

Movable Feast also operates in the Angel Orensanz Center, One Hanson Place, and elsewhere around the city, according to its website.

The NYPD said it has not received a missing person report for Berson.

The situation has echoes of the closure of DUMBO bar, restaurant, and venue Rebar, which ruined the plans of numerous couples who had booked weddings there. After a period where he disappeared, Rebar owner Jason Stevens was criminally charged with looting his business and dodging taxes. He ultimately pleaded guilty to tax fraud and grand larceny and was sentenced in 2014 to three to 10 years in prison. He was released on parole in April.

"We're not in a position where we can just say ‘Goodbye, thousands of dollars. Let's just start fresh with someone else,'" Powlovich said. "We're only 24 hours into this ordeal—but at this point, we're not going to be able to get married [in October]."

#brooklyn
#Jackson Berson
#prospect park alliance
#Prospect Park Boathouse
#weddings
#original
Do you know the scoop? Comment below or Send us a Tip