We WIN Everything: NYC Is The MOST Competitive

New York City, you beautiful bastards, we did it: we are the MOST competitive city. 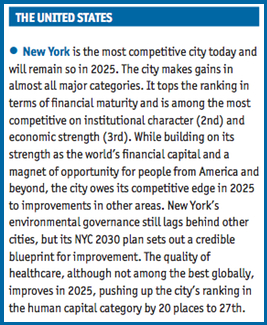 A new study released by Citigroup confirms what we already knew—that we are the MOST willing to step over one another in pursuit of business, a parking space, or a spot in a good school for little Zasia Denim (who is so much better than those other kids at playing with blocks).

Apparently our diversified economy is enough to put us ahead of rising stars like Singapore, Hong Kong and Tokyo, and Citigroup forecasts that they will overtake us at some point. Overtake us from our cold dead hands!

“New York is at the top of the list in terms of financial sophistication,” Leo Abruzzese, global forecasting director for the Economist Intelligence Unit told the NY Times. The city “still remains in many ways the financial capital of the world.” Oh hell yeah, built on a completely precarious industry that could collapse at any moment. That's how we roll.

The study also pointed out that our most glaring weakness has been in preparation to cope with storms and other natural disasters. Well, whatever, next storm comes, WE'LL KICK ITS ASS RIGHT IN THE FACE.

As to all those other "rising" cities, we say this: Singapore, let's do this! You want a piece of New York? We've been lifting weights and doing cocaine ALL DAY, so we're ready. AND WE WILL WIN.

#competition
#DJ Khaled
#new york city
#taxis
Do you know the scoop? Comment below or Send us a Tip