'We Will Be Heard': At Queens Pride Parade, DA Candidate Tiffany Cabán Builds On AOC Momentum

At last year’s Queens Pride Parade, Alexandria Ocasio-Cortez’s meteoric rise to Congress played out on the streets of Jackson Heights, as her supporters far outnumbered those for incumbent Congressman Joe Crowley. “It was this parade that helped propel her to victory!” the MC of the parade proudly announced to the crowd on Sunday, as the congresswoman’s supporters marched down 37th Avenue.

This year’s festivities featured a new insurgent candidate endorsed by Ocasio-Cortez: 31-year-old public defender Tiffany Cabán, who is aiming to win the Democratic primary for Queens District Attorney, the most powerful position in the borough, and arguably more important in the day-to-day lives of Queens residents than a member of Congress.

“If you don’t know, now you know. Tiffany Cabàn is going to be our next Queens District Attorney!” Ocasio-Cortez announced after embracing Cabán on Sunday.

But unlike Ocasio-Cortez, whose campaign was bolstered by Crowley’s dismissal of his opponent, Cabán is facing off against six other challengers in the Democratic primary on June 25th, including one of the women leading the parade — term-limited Queens Borough President Melinda Katz, who along with a powerful campaign war chest bolstered by heavy donations from the real estate industry, is the only candidate in the field to have won a competitive race for county-wide office.

Richard Brown, the previous Queens District Attorney, died in office earlier this year, after having never been opposed in a primary during his twenty-eight years in office. Queens has not had a competitive race for District Attorney in at least sixty years, and its prosecutor’s office has been criticized by nearly every candidate in the race for being mired in an old-fashioned “tough on crime” way of doing things, especially when it comes to minority and immigrant communities.

“This is literally a once-in-a-generation opportunity to have a clean break from the justice system that we’ve had in Queens. One that has fed into mass incarceration, one that has continually disserved and oppressed and marginalized our black and brown, low-income, our LGBTQIA+ and immigrant communities,” Cabán told Gothamist. "We have an opportunity for some bold transformative, change. It just takes out-organizing everyone else."

If the parade itself was any indicator of voting intention, then Cabán would be the clear frontrunner. She had the largest marching contingent of any of the four leading candidates who attended on Sunday, including retired Judge Gregory Lasak and City Councilmember Rory Lancman. Katz had around a dozen supporters in tow, while Lancman and Lasak were each accompanied by smaller groups.

A queer Latinx who lives in Astoria, Cabán’s base of support is centered in western Queens. That’s where long-standing immigrant and activist groups in Jackson Heights and Corona have connected with newer, ascendant groups like the Queens chapter of the Democratic Socialists of America, who run strong in neighborhoods like Astoria and Sunnyside. Cabán has led the field in small donations as well.

“That’s her, that’s who we’re voting for,” Esah Ali enthusiastically told his friends as Cabán and her supporters marched past them on 80th street and 37th avenue.

Ali, a Forest Hills lawyer who had interned in the Bronx DA’s office and who has a family member working for the Queens District Attorney’s office, said he was voting for Cabán because he was disillusioned with the Democratic party in Queens, and that Cabán’s lack of experience working as a prosecutor was an asset to her candidacy.

“Cabán has seen the system, she’s seen the good, the bad and the ugly, on the public defenders side. We need true representation in this borough from someone who has lived a life like us,” Ali said. 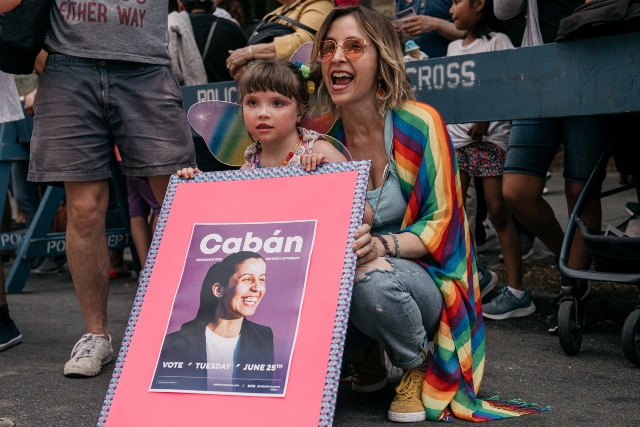 Cabán has been hit relentlessly by her opponents for her lack of experience as both a prosecutor and someone who has managed an office with hundreds of employees and millions of dollars at their disposal.

“I’ve been in elected office for twenty-five years. I stand out because people trust the borough president right now, people trust who I am. I have a track record,” Katz told Gothamist, before the parade began. “Every morning I wake up, I answer to every constituent in the borough of Queens.”

Katz, who has never practiced in criminal court, has the backing of the hobbled Queens Democratic Party, as well as major labor unions in the borough, and Governor Andrew Cuomo. She has endorsed similar ideas as many of the reform candidates in the race, like Cabán and Lancman, including ending prosecutions for marijuana possession and radically overhauling the borough’s bail policies.

Katz, who has raised the most money in the race, is also the target of the first negative ads in the primary. Former judge and Queen prosecutor Gregory Lasak, who is running as the continuity candidate, has sent out mailers asking “Who would you trust with the safety of your loved ones, your children?” alongside an unflattering photo of Katz. Another refers to Katz as a “career politician” with a blank resume in the criminal justice field.

Lasak has the backing of the borough’s law enforcement community and has been reticent to criticize the office he’s been closely involved with for over thirty years.

“He represents all the communities, and not just one special interest like some of the other candidates,” said Lasak supporter Leonard Damico. “Some of the other people are pandering to specific groups, while judge Lasak, the experienced candidate, has seen all walks of life come through the criminal justice system, and knows how to treat people fairly.”

With millions of dollars in the race and at least four candidates almost certain to receive a double-digit percentage of votes, and no public polling available, the race remains deeply unpredictable. With Lasak and Lancman spending heavily on television advertising, it’s becoming increasingly likely that several candidates will split established voting blocs.

Katz, Lasak, and Lancman are all aiming to connect with their bases in middle-class white neighborhoods in central Queens and suburban neighborhoods in eastern Queens. Lancman has also invested time and energy in connecting with black neighborhoods in southeastern Queens — he spent Sunday morning speaking in churches there — while Katz has the backing of Democratic power brokers in that area.

Well-funded candidate Mina Malik, a former prosecutor whose campaign has failed to generate much momentum after she tried to have several candidates removed from the ballot, also spent Sunday campaigning in churches in southeast Queens and has focused much of her campaigning there.

Lancman, who was running as the left-most candidate before he was outflanked by Cabán, feels as if he still has the wind at his back.

“I was the first one to announce with a bold and audacious criminal justice reform agenda, and I haven’t deviated or wavered in that,” Lancman said as he made his way through the Pride festival. “I was able to frame this race around reform. I have a willingness to put my money where my mouth is.”

As much as Cabán was the clear choice of this year’s Pride parade, the true star of western Queens politics remains AOC, who spent her Friday bartending on Northern Boulevard in support of worker’s rights and her Sunday on the receiving end of a long line of supporters clamoring for a photograph. (Ocasio-Cortez skipped marching in the parade on Sunday on account of a cold, but did appear at the street fair later to meet with rapturous parade-goers).

AOC’s endorsement of Cabán has given a financial boost to Cabán’s campaign, which reportedly struggled early with organizational issues before steadier hands at endorsing organizations like the Working Families Party and VOCAL-NY helped give her the structure to compete borough-wide.

If Lancman, Lasak, Katz, and Malik end up splitting the contested terrain of the rest of the 2.3 million-person borough, and Cabán cleans up in western Queens and Brooklyn-adjacent neighborhoods like Ridgewood, it’s possible she walks away with a victory even more stunning than AOC’s. Then again, with Governor Cuomo, who’s extremely popular in his home county, now coming to the aid of Katz, the borough president still appears the frontrunner.

Sitting on the sidewalk of the festival, exhausted after hours of greeting supporters, Cabán reflected on the insurgent campaigns that have swept through Queens this year, starting with AOC and continuing with the destruction of the much maligned-Independent Democratic Conference at the state level.

“Folks in our community have felt empowered and have been saying, ‘No, we will be heard,’” Cabán said. “And this feels like a continuation of that organizing and it has become really, really powerful.”