A few weeks ago, we reported that Park Slope residents were complaining about relentless noise pollution from planes flying overhead. To be sure, Park Slope is not the only neighborhood regularly assaulted by airplane cacophony—other Brooklyn neighborhoods are located directly beneath LaGuardia's flight path, and some Queens residents have been trying to do something about aircraft noise from both LaGuardia and John F. Kennedy Airport. We wanted to see how loud things really get in these besieged neighborhoods, so we took to the streets with a decibel meter to see what was up—between noise from planes, trains and automobiles, well, it's pretty deafening.

NYC's Noise Code [pdf] was updated in 2007. It scales a normal conversation at 50 to 65 decibels (in close proximity), a vacuum cleaner that's 10 feet away at 70 decibels and a motorcycle at 88 decibels—a nearby jet taking off clocks in at 130 decibels.

In Bay Ridge, general street noise ranged from low 50 decibels to low 60 decibels. Though plane noise wasn't off-the-wall (the largest plane only clocked in at 69.2 decibels) we did notice that planes were flying overhead at an approximate rate of one per minute, from about 1:30 p.m. to 1:50 p.m. on a weekday. The area just outside Prospect Park area yielded similar general noise levels, though fewer trucks drove by between 2:30 and 2:50 p.m. on a weekday. The maddening din from airplanes rose all the way up to 76.4 decibels at their highest point.

Though plane rumblings in East Williamsburg were the loudest—planes registered at 78.2 decibels—the neighborhood's truck sounds were the most disturbing between 3:30 and 3:50 p.m. on a weekday, with noisy trucks even torturing side streets in the neighborhood.

Woodside's residential blocks appeared to be relatively quiet from 12:45 p.m. to 1:15 p.m. on a weekday, with street noise hovering between 52 and 60 decibels and the odd motorcycle or bus bringing the ruckus. The largest plane clocked in at 72.9 decibels. And in LaGuardia Landing Lights Park, plane noise typically hovered between 62 and 68 decibels, though it jumped to 80 decibels when two planes traveling in opposite directions flew overhead at the same time.

Our decibel recordings aren't nearly as scientific as something you might produce using a professional noise monitor, and the brief intervals we spent in each neighborhood aren't necessarily indicative of the noise pollution there as a whole. But it's clear that the unpleasant airplane noise along LaGuardia's flight path is, at the very least, incessant.

"The noise that we're subjected to is harmful to our health, ruins our quality of life, is not adequately measured by FAA and is never used to plan for future flight procedures," Janet McEneaney, who is President of Queens Quiet Skies, told us. "This is too much noise. We're getting up to residential areas subjected to over 80 decibels repeatedly, and that includes Park Slope and other parts of northern Brooklyn."

McEneaney, who lives in Bayside, says it's up to the government and the aircraft industry to make mitigating airplane noise a priority. "Airlines made record profits last year. they ought to be putting some of that money into reducing the noise issues," she said, noting that some solutions include designing quieter airplanes and using noise abatement procedures during takeoff and landing. 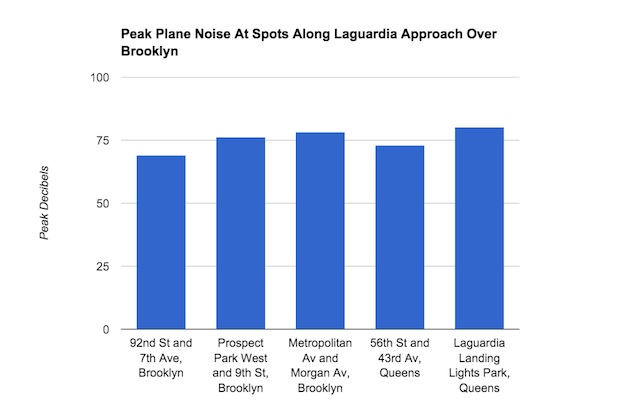 "I think it's interesting that the noise only increases by about 10 decibels from Bay Ridge to LaGuardia along the flight path—so all those people saying like 'quit whining, Park Slope—imagine what it's like in Woodside!' are being unfair," says Park Slope resident and Gothamist publisher Jake Dobkin. "70 decibels vs 80 decibels is a meaningful difference (similar to a vacuum cleaner vs. a blender, or an alarm clock vs. a screaming child, according to the various decibel scales I looked at online), but it's still going to be loud all along the flight path, if planes are landing every minute or two. That's especially true if the background noise is only 50 decibels to 60 decibels. I think some of this might not be the absolute level of peak plane noise, but [shows] just how annoying it is for the sound to go up and down all the time."

According to the FAA, the agency works with airport proprietors to develop noise abatement strategies in hopes of confining the most severe aircraft noise within the boundaries of the airport's land—you can take a look at some of their noise emissions policies here [pdf].

And though some local officials say they've received more complaints about plane noise, others argue that aircraft noise pollution has lessened over the years. "If anything, the skies are getting quieter. The planes that are being used are being much more flight efficient and fuel efficient," Phil Derner, who runs NYCAviation.com, told us. "All the planes are newer. The older, louder planes have been phased out. If you did these tests 10 or 20 years ago, you'd see a dramatic decrease in noise [now]."

Meanwhile, though plane noise was indeed problematic, we found that train noise on subway platforms was the biggest commotion culprit. Squealing breaks clocked in at 89.5 decibels, and noise from passing trains while waiting at train at the station reached all the way up to 100.3 decibels, proving once and for all that your commute is killing you one missed F train at a time.

With Angely Mercado and Jessica Warriner

#airplanes
#brooklyn
#faa
#noise
#park slope
#plane
#queens
#original
Do you know the scoop? Comment below or Send us a Tip