We The Commuters Newsletter: How Deadly Has 2019 Been For City Pedestrians?

Plus: Another round of Penn Station track work is about to disrupt some NJ Transit and LIRR riders, but don't expect the Summer of Hell 2.0. An NYPD union tweeted a video of oral sex in a subway station, in a roundabout attempt to criticize the state's congestion pricing plan. And do you know the MTA's official rules about subway behavior? Take our quiz to find out.

We the Commuters is a weekly newsletter about transportation from WNYC and Gothamist. Sign up below! 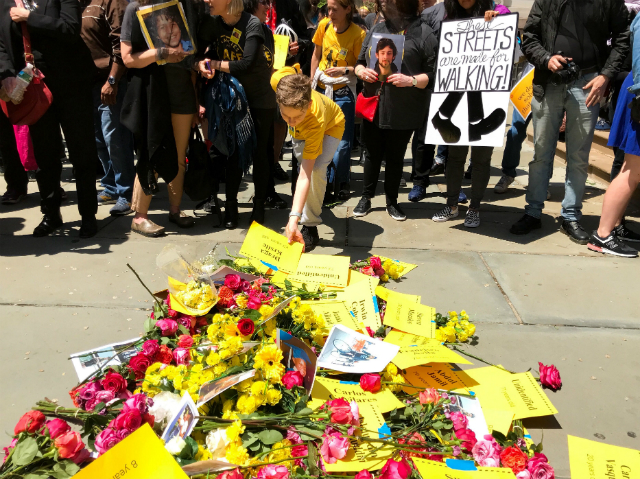 Last year, traffic deaths in New York City hit a record low: 203. This, in a city with over 8.6 million people.

But any New Yorker who's crossed a sidewalk, or ridden in an obstructed bike lane, or hopped in the back of a cab knows the risk involved. During a recent run-commute for this newsletter, I waited for every walk signal and still had two close calls with trucks.

This year, the fatality figures are slightly higher. There have been 68 traffic-related deaths in New York City so far, according to the NYPD, which is a 30 percent increase compared to the same time period last year.

But fatalities for pedestrians, bikers, drivers, and passengers are still considerably lower than they were in 2013 (299), before Mayor Bill de Blasio announced his Vision Zero plan, which aims to get that number down to...zero.

It's ambitious. It's hard to implement. And it's not so easy to track. I asked WNYC's Stephen Nessen for a brief primer on Vision Zero and what the data says about how well it is (or isn't) working.

Stephen, even though traffic deaths are generally down, you reported that street safety advocates declared a "State of Emergency" outside City Hall this week. Why?

SN: This year, there appears to be an uptick, so far, in traffic-related deaths. And in Bath Beach, Brooklyn, last week, a 3-year-old toddler was killed while riding a scooter in a crosswalk at an intersection that doesn’t have a street light, just a stop sign.

What tangible changes do activists want to see?

SN: They want the city to ensure that any time street work is done, it includes Vision Zero traffic "calming" devices, like pedestrian islands, extended curb cuts, and protected bike lanes. There’s a bill in the City Council that's expected to come up for a vote by the end of the month that would require the Department of Transportation to do this, and if it doesn’t, it’ll be required to explain why not.

Over time, much of the city was designed and built to prioritize cars and trucks over pedestrians and bikes. Does Vision Zero contain any sweeping plans to reverse that?

SN: Not exactly. While there are something like 209 “initiatives” that are part of Vision Zero, most of them involve redesigning streets to make them safer for vehicles and pedestrians.

But nobody has the stomach, yet, to designate large stretches of roadways as pedestrian-only. The mayor is trying to get trucks to make deliveries during off-peak hours, but it won’t radically change the streets as we know them. 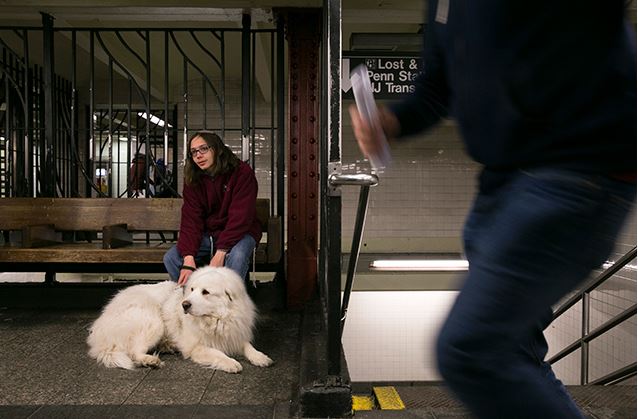 Service dogs: They shouldn't be touched. You shouldn't assume they're "fake." And they aren't just for the visually impaired.

"A service dog can help with almost every single disability you can think of, like a psychiatric disability like PTSD or diabetic alert or seizure," Liam Klein, pictured above, told WNYC's Shumita Basu.

Klein is a 14-year-old commuter whose Great Pyrenees service dog, Einstein, can smell changes in his cortisol levels and warn him if he’s about to experience a PTSD-related hallucination or panic attack.

His advice to commuters who spot an animal with a service vest:

An update from Shumita: We've been going through the results from our Commuter Survey, and we're reading a lot of annoyed comments from adults about how they dread taking buses and subways right when schools let out, because students can be loud, disruptive, and generally back-packy.

Middle and high school students: The floor is yours. How do you respond to this annoyance from adults? What would you like them to know about your commute? Shoot an email to sbasu@wnyc.org. (And if you're an adult, pass this along to a student in your life!)

Best of the Week From Gothamist and WNYC

Don't expect the Summer of Hell 2.0, but some NJ Transit and LIRR riders will face disruptions when Amtrak begins another round of track work at Penn Station. NJ Transit delays and diversions are set to begin on June 17; LIRR changes start July 1.

About 500 New York City Uber drivers turned off the app for a short period Wednesday morning to protest low wages ahead of Uber's initial public offering. One driver told us he also wants Uber to restore a destination filter to the app, so he doesn't get stuck driving passengers to Westchester at night without a fare coming back to the city.

The second span of the Kosciuszko Bridge is now scheduled to open in September, four months ahead of what the state initially projected. The chief engineer on the project said the $873 million price tag — which makes this the most expensive single-contract public works project in New York history — is worth it, since the bridge will last 100 years.

Someone in Bushwick put a British double-decker bus up for free on Craigslist last week. The page is now closed, so somebody must've claimed it. If you got it and would like to make it the official We The Commuters Partymobile, let me know. 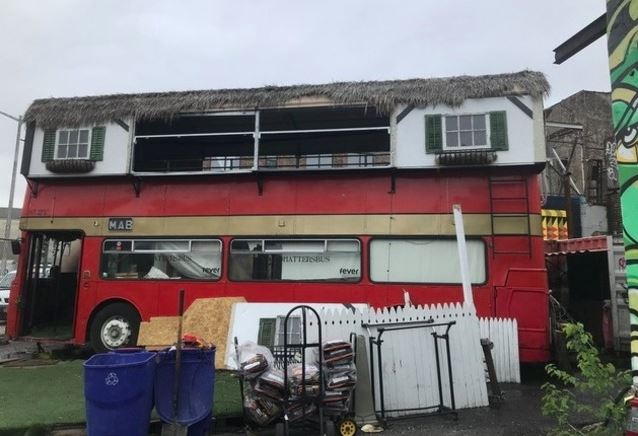 What Else We're Reading

People who say they don't like congestion pricing tend to get over it, according to polling in London, Stockholm, Oslo, and other European cities that have levied fees on drivers for entering busy parts of town. So, while a recent Quinnipiac poll found that 54 percent of New Yorkers oppose congestion pricing, that could very well drop once it goes into effect in 2021. (NPR)

Only two of New York City's five boroughs made this list of the most bikeable places in America. Manhattan and Brooklyn both got a thumbs up from PeopleForBikes, a biking advocacy group, while Staten Island, Queens, and the Bronx did not. Those three boroughs have also seen a 16 percent increase in cyclist fatalities so far this year, compared to the same period last year. (Streetsblog)

Subway station escalators have become less reliable. Escalators worked 92 percent of the time last year, compared to 96 percent in 2012, according to the MTA. With the summer heat coming, there's concern that this could become a public health issue. (The New York Times)

The union for NYPD sergeants tweeted a video of two men engaged in oral sex in a subway station, in a convoluted effort to complain about congestion pricing. The video was soon removed, but the Sergeants Benevolent Association said it stands by its point that political leaders shouldn't be charging drivers more when "quality of life [on the subways] is a total DISGRACE." (New York Daily News)

"Flight-shaming" has become a thing in Europe, thanks in part to Greta Thunberg, the Swedish teen who's been taking trains all over the continent to raise awareness about global warming. Train travel reportedly creates 15g of carbon dioxide per kilometer, while planes emit about 100g per kilometer. (The Guardian)

Quiz: Can You Do This On The Subway?

But there's also an official MTA rule book with some surprising details about what you can and can't do on a subway or a bus. Take our We The Commuters quiz to see how well you know the actual rules of the rails.

Best of the MTA's Lost and Found 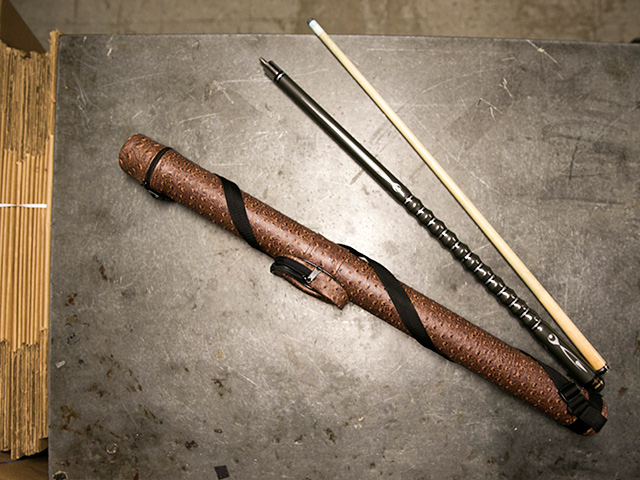 With a pool cue this fancy, you can only hope the shark who left it on the train at least made up the difference hustling people.

If you recently lost something on a bus, subway or the Staten Island Railway, stop by the MTA's Lost and Found at Penn Station. If you don't claim your property in time, you may get a second chance to buy it when it goes up for auction.

Weekend Service Changes: Night of May 10 - Early Morning on May 13

This is a partial list of major service disruptions scheduled for the weekend. For a complete list of the MTA's Weekender updates, check here.

A train service between Rockaway Blvd and Far Rockaway in Queens will be replaced by free shuttle buses and the S Rockaway Park Shuttle.

During the day on Saturday and Sunday, 96 St-bound Q trains will run express from Kings Hwy to Prospect Park in Brooklyn.

On Saturday and Sunday, train service between Broadway Junction in Brooklyn and Jamaica Center in Queens will be replaced by trains and free shuttle buses.

For NJ Transit, check here for the latest service advisories.

For official MTA committee meetings, registration for two-minute public speaking slots opens 15 minutes before the start time. To speak before a board meeting, you must register 30 minutes early. Both are held at at the MTA's Board Room at 2 Broadway on the 20th Floor.

#newsletter
#subway
#we the commuters
#we the commuters newsletter
Do you know the scoop? Comment below or Send us a Tip
A new Gothamist is coming! We’ve moved comments over to our beta site. Click here to join the conversation and get a preview of our new website.