We Tested The Lead Levels In NYC Parks

By
Christopher Werth
and
WNYC Staff

By
Christopher Werth
and
WNYC Staff

Planning a picnic in the park this weekend? Do your kids make mud pies in the tree pits at your local playground?

Well, brace yourself for one more thing to worry about, because Gothamist/WNYC has tested the soil in three New York City parks and found lead levels that exceed the current EPA and New York State standard of 400 parts per million (ppm). In comparison, California's standard is 80 ppm, while others suggest a limit of 150 ppm—by this yardstick, our greenspaces fail miserably. 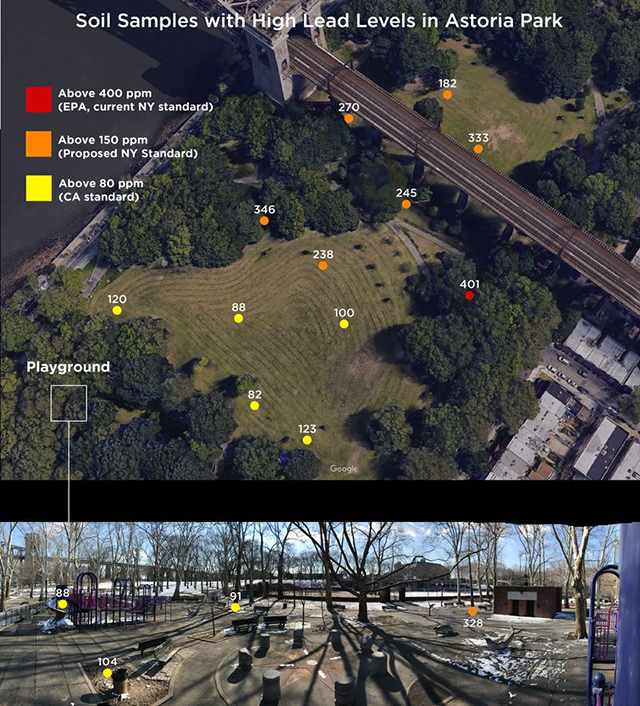 In Astoria Park, which is intersected by both the RFK and Hell Gate bridges (think decades of leaded gas fumes and loads of heavy-duty lead paint), the average lead level was 136 ppm. Seventy-four percent of our samples exceed the California standard, while one from a playground in the park measured at 328 ppm. 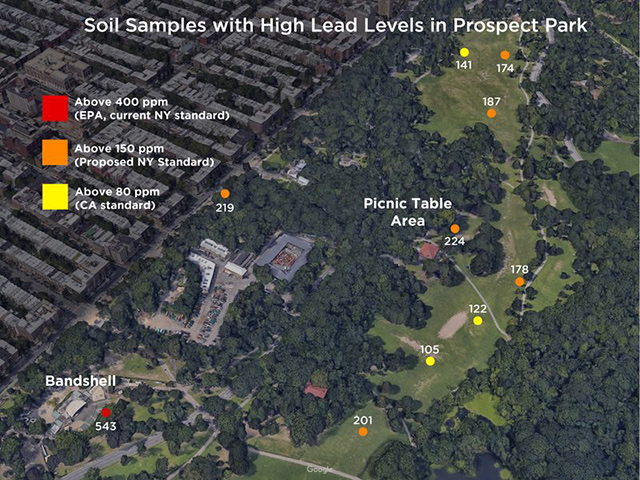 In Prospect Park, which has been around since the 1860s, average lead levels were 140 ppm. Our highest single sample came from the lawn around the Prospect Park Bandshell at 543 ppm. 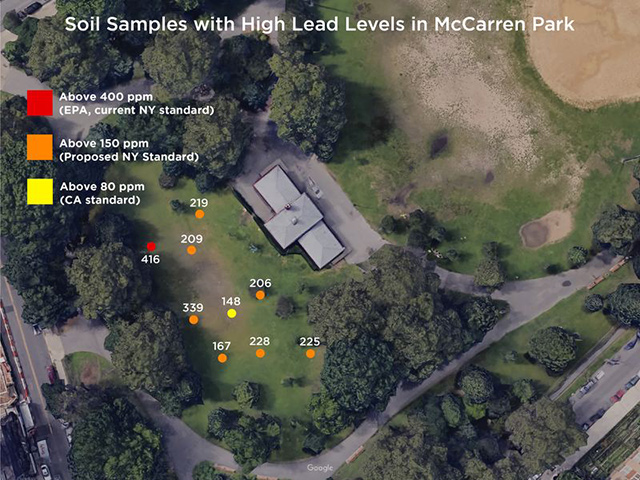 McCarren Park is another story—Greenpoint and Williamsburg were once filled with heavy industry, and in fact, there used to be a lead paint factory right next to the park on North 12th Street and Bedford Avenue. The average lead level in the area we tested was 201 ppm.

All of our samples in this area failed the California test.

Still, the lead levels Gothamist/WNYC found in parks were low compared to soil in private yards tested by Urban Soils Lab at Brooklyn College, which had levels from 400 ppm to a shocking 9,000 ppm. 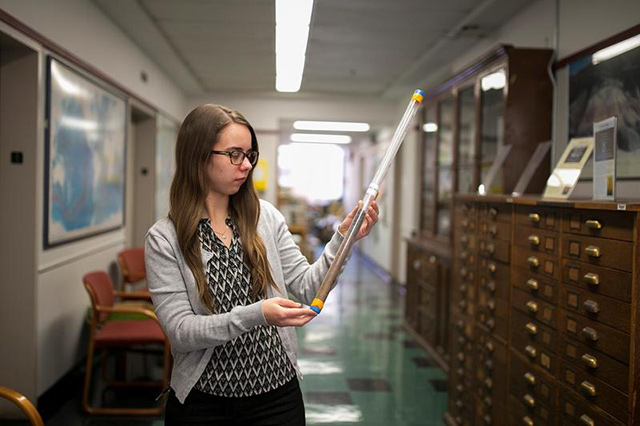 Franziska Landes, Ph.D. candidate at Columbia University who’s conducted her own research on soil lead in North Brooklyn, holds a core sample of soil taken from a backyard in New York. Core samples are used to study contamination. (Clarissa Sosin for WNYC)

City leaders have been divided on what to do about soil contamination. Last year, Queens councilman Costa Constantinides introduced a bill that would require the Parks Department to test the soil in NYC parks. Under this bill, they would need to make these test results available to the public, and then remediate areas with high levels. But the city’s health commissioner, Oxiris Barbot, has been opposed.

"Soil is not, I repeat not, a significant source of lead exposure for children in New York City," Barbot told the City Council at a hearing last fall, although research in other cities such as Detroit, New Orleans and Los Angeles have shown soil to be linked with elevated lead levels in children.

In an interview, Barbot said there are some very simple measures parents can take to reduce exposure. “For example, the most common advice that everybody's mother gives them when they're out playing in a playground is 'Wash your hands.'"

For more on these test results, head to WNYC.