Citi Bike is launching on May 27th, and to prepare the world for the big day, DOT and NYC Bike Share gave us a chance to take the bikes out for a carefully monitored whirl around Brooklyn Navy Yard. Here's what we learned in the hour we spent investigating the bikes:

Removing the bike: Members need only to insert their plastic key into the slot next to each bike, and wait for the light to change from yellow to green. Sounds simple enough, though even DOT officials seemed foiled by the locking mechanism, failing several times before the protective racks would liberate the bikes from their clutches.

Once the light is green, you may attempt to extricate the bike, "attempt" being the operative word. With practice one acquires the deft touch necessary to pluck the bike from the steely death grip of the station, but initially, it's about as easy as birthing a baby bull from an unrelenting cow. The trick, apparently, is to lift the bike by the seat, drop it back to the ground and slide it out. Good luck with that.

Check the bike: Gaze upon your bike. Are the tires firm? Do the brakes work? Is the chain taut? Yes? Good. No? Put the sucker back in and get another one. Adjust the seat height by pulling the lever, wiggling it to the desired height. (Standing next to the bike, the seat should be at the same level as your hips.)

Pro tip: Make these adjustments before removing the bike—once it's out, you're paying for it.

Returning the bike: This is fun! Line up the triangle at the front of the bike with the triangle in the docking station, and slam it in there with the force of 1,000 angry suns. Pretend you are Beatrix Kiddo, and the rack attempted to murder you on your wedding day (while you were pregnant.) If you'd prefer, you can also be John Creasy, or even Leonard Shelby. The point is the the rack has wronged you, and it must pay.

Pro tip: Place your the foot on one pedal and push forward for added leverage/style points.

The bike: Citi Bikes weigh 45 pounds, making them the bicycle equivalent of a 1992 Kia Sedona. DOT has no information on maximum Citi Bike velocity, so we took the liberty of drag racing them ourselves using the app Cyclemeter, which, among other things, records your top speed.

Gothamist staffer Tien Mao was able to hit 21.42 miles per hour, but it was not without cost. Mao panted for several minutes following the test run, gasping and saying things like "I'm going to have a heart attack." When riding his own Felt X:City hybrid, which weighs in at a comparatively dainty 25.1 pounds, he was able to hit 24.15 mph. Is it fair to blame Citi Bike? Not totally. "I felt pretty horrible both times," Mao confirmed in a statement.

Other things: The seat is wide and squishy, the closest I have ever come to pedaling an office chair. The low-slung frame means ladies and select gentleman can don their most lavish ball gowns and not worry about tulle getting tangled in the spokes. If you typically ride a road bike, you will perhaps enjoy the sensation of sitting upright, though you will also perhaps revile the sensation that you are traveling at the speed of bored molasses. If you are a female born in the mid-80s, you will be stricken with the acute desire to strap a transistor radio to the handlebars and shimmy your way down a dirt road with three of your closest friends to the 1970 hit Knock Three Times, by Tony Orlando and Dawn. Or not! Whatever. 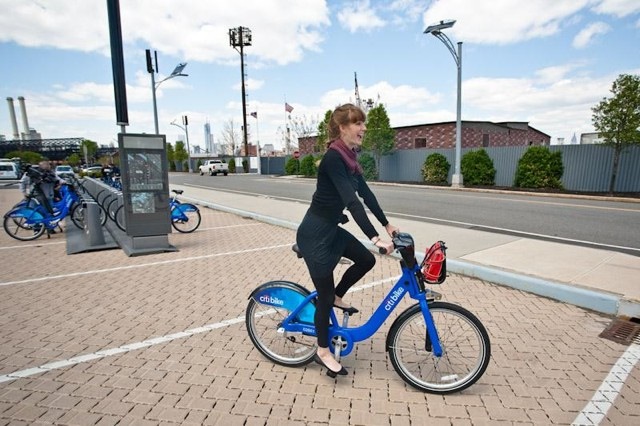 If all of this sounds like a real swell time, pop, go ahead an purchase your Citi Bike membership here.

#bikeshare
#brooklyn navy yard
#citi bike
#original
Do you know the scoop? Comment below or Send us a Tip