For the last eight weeks, Antonio Martinez—a longtime Queens resident, husband of a U.S. citizen, and father of two young children—has been detained at the Hudson County Jail in New Jersey. Martinez, a heating, ventilation, and air conditioning specialist, was first taken from his family on April 27th, during a routine green card interview alongside his wife Vivian at Manhattan's federal immigration building. Soon after, Vivian was informed by an ICE agent of a "new policy" aimed at detaining the spouses of U.S. citizens who pursue a legal pathway to permanent residency status, according to a lawsuit filed on Friday by the ACLU and NYCLU.

The suit, which names Martinez, alleges that the policy is a "trap" that violates due process, and calls on the courts to declare it illegal. It was allegedly implemented in New York two months ago, and since then immigration lawyers say they've seen an uptick in the arrests of longtime residents with pending green card applications—a group that includes Pablo Villavicencio, Xiu Qing You, and likely many others.

Also on Friday, in response to an emergency petition filed by the two civil liberties groups, a federal judge granted a stay of deportation to Martinez, who has no criminal record, according to the ACLU. But while his imminent removal was halted, Martinez remains imprisoned at the Hudson County Jail, away from his newborn son and toddler daughter. His wife, a lifelong resident of Corona, Queens, has repeatedly called on the judge to release her husband, and notes that she was led to believe that this type of separation "doesn't happen in New York City." Below, we spoke to Vivian Martinez about the new federal directive, and what happens after ICE tears a family apart.

What was your reaction when you learned on Friday that the deportation had been halted, but that he still wouldn't be coming home?

It did give me a little relief to at least know he's not going to be sent back, that his life isn't going to be in danger for now. But in another way, it really hurts that we don't have him here home with us. I would've thought that maybe they would've seen us and said, "Okay, he doesn't have a criminal record. He was trying to fix his status. Let's release him as he keeps progressing with his case outside." I had my hopes for that. We really thought the judge was going to let him wait it out with us. 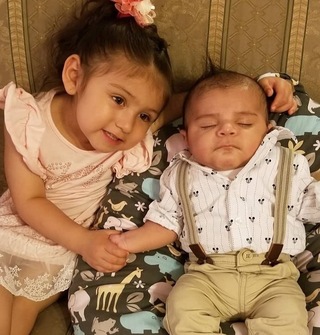 (Provided by Martinez family)
How are your two children doing?

We have a baby, Aaron, who'd just turned two months old when Antonio was detained. Kaylee is almost three years old. It's been very hard because I had a c-section, and Antonio was the one who helped out with the baby, and he also had a very strong bond with Kaylee. She's very smart. She asks for him constantly.

At first when he was gone, she'd go out to the window and see his car parked outside, and scream to me, "Mami, Mami—Papi's home!" I had to move the car two blocks away so she couldn't see it. But he used to let her play with his car keys, and turn the car on with the remote. So now she grabs the keys and holds them by the window trying to click the car, because she connects it with her dad.

She has growing pains, and he used to be the one who'd stay with her at night and comfort her and rub her legs to make her feel better. She's used to him sleeping in the same bed as him, so she'll wake up in the middle of the night and call out for him. She has night terrors now. It's hard because she doesn't understand where he is, but she wants to see him.

With Aaron, my milk production stopped because of the stress and anxiety, so I can't breastfeed now. I had to put him fully on the formula because of this situation.

When he was detained in April, what was the justification?

We had an I-130 interview, which is when a husband and wife do an interview to see if the marriage is in good faith, so we can prepare ourselves for a green card application. Our goal was that after this interview we were going to proceed with his green card.

During the interview, the officer told me to step outside. My lawyer came out and said, "I'm sorry, he just got detained." So that was very hard. I was left cold, I didn't know what to do. We didn't think this would happen.

[Citing an ongoing lawsuit, Vivian declined to talk about what happened next. According to the ACLU and NYCLU, an ICE agent admitted that her husband's detention was part of a new policy that was implemented in New York two to three weeks prior.]

Did you know there was a possibility that something like this could happen during an interview?

We knew that they were detaining people during interviews, but not in New York City. We saw things on TV—in Arizona, Michigan, Texas, but not in New York City. We thought that because this is a sanctuary city we weren't going to have that problem. Antonio has never gotten in trouble in 15 years. He's paid all his taxes in 15 years. He's a hardworking guy who's never even gotten a ticket—we really didn't think we'd have an issue. We were so happy that we got this interview. We thought we could proceed with getting his documentation. We never saw it coming whatsoever. 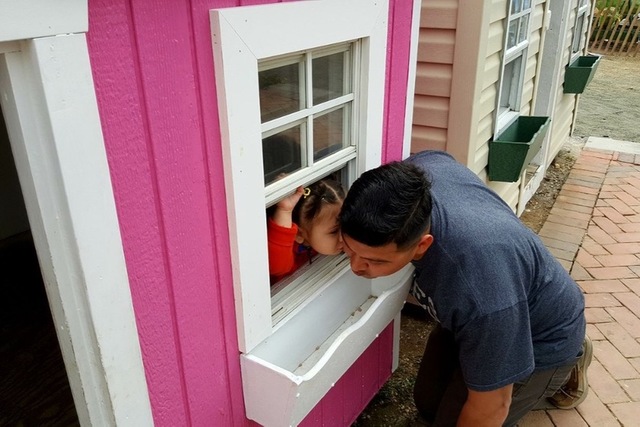 What did you do after he was detained?

Once he got arrested, I really didn't know what I was going to do without my husband, or what I was going to tell my two-year-old. That day was very hard. I remember it was raining very hard. I took the train and the bus back to Queens, just thinking the whole time. The walk from my house to Kaylee's school is three blocks long. That was the longest three blocks of my life. I picked her up and tried not to cry, but when she got home, she expected him to be home. She said, "Mami, where's Papi?" I told her that he's working. When nighttime came, she asked me again. I told her daddy's going to be back in a couple days. She looked at me and said, "No I want dad. Where's Papi?"

How often have you been able to see your husband in the last two months?

I've been going to New Jersey every Saturday to visit him. My daughter asks to see him constantly. He calls us, so now every time my phone rings she thinks its her dad. When he calls, she talks to him through the phone, and says, "Daddy, can I go see you today? Can I see you now?" I had to explain to her that we go see him every Saturday. Her school gave me the idea to get a big calendar, and every day that passes we put an X on it, then on Saturday we put a happy face. She likes to put stickers on it, because she knows that's the day we see dad.

But it's a big trip for a two-year-old and four-month-old, and with the tolls and everything...financially, we've gone a little bit backwards. Since he was our breadwinner, it's hard to survive. A cousin actually just started a GoFundMe for our basic needs—diapers and things.

There's no time frame yet, in terms of other court dates. The legal counsel is still figuring that out. But we just hope he comes back home. I want him to have the opportunity to wait for his process while living here with his family. Having him back would help us financially and psychologically—and him too. I know he's worried about us.

When we saw him on Saturday, he said "You know what, I just give thanks that I'm still here, where I can still call you." But I think it'd be a huge relief. He's been here for 15 years, never did anything wrong. I think it's what he deserves. With lots of faith in God, once this is over we'll create more memories with our kids.

This interview has been condensed and lightly edited for clarity.

#antonio martinez
#ICE
#ICE agents
#immigration
#vivian martinez
#zero tolerance
#original
Do you know the scoop? Comment below or Send us a Tip