'We Have Overcome Tyranny Before': Rep. Clarke Blasts Trump At Packed Town Hall

Brooklynites packed Union Temple in Prospect Heights to the rafters Wednesday night for a town hall with U.S. Representative Yvette Clarke, back in her district during this week's Congressional recess.

The meeting, which brought so many out that the line stretched three blocks and the temple sent hundreds of latecomers upstairs to watch a livestream on a projector, focused on key points of the Trump agenda, as well as strategies for constituents as well as the broader Democratic Party to combat the most extreme policies of the Trump administration and Republican Congress.

Clarke blasted President Trump, calling his election "illegitimate" and calling out far-right Republican policy goals, including plans to gut the Affordable Care Act and proposals to eliminate a range of programs, including the National Endowment for the Arts and National Endowment for the Humanities (she pointed out that they support the Brooklyn Public Library, the Brooklyn Museum, and BAM) and the Legal Services Corporation, which provides grants for legal representation for low-income individuals with cases in civil courts.

Clarke sought to paint a larger picture of Trump as outside the mainstream, pointing in particular to the scale of the Women's Marches as evidence of popular opposition to the administration.

"About 250,00 people attended Donald Trump’s inauguration where he presented his vision of America, a vision that absolutely terrifies most Americans," Clarke said. "I did not attend the ceremony." (The crowd, which was relatively low-key though at times loud throughout the meeting, went nuts for this.)

After Clarke kicked the meeting off, she turned to a panel her team had assembled, which included representatives from Planned Parenthood New York, the NYCLU, SUNY Downstate Medical School, and the NYS Department of Health, as well as experts on climate change and civil rights/immigration law.

Panelists weighed in on prominent issues in their areas of expertise, with presentations touching upon everything from the dangers posed by the imposition of the global gag rule—which cuts funding to any international NGO that discusses abortion with clients—to the ecological degradation expected from the rollback of environmental regulations to the legal rights afforded to Americans (documented and undocumented) if they are detained by law enforcement.

A Q&A session followed, with a lot of audience participation pushing the event past it's 9 p.m. end time.

Public Advocate Tish James, who along with Assembly Members Walter T. Mosley and Latrice Walker, was also in attendance, hopped on stage to offer some last-minute words to the crowd. "We've got to stand up to Agent Orange," James said. "We've got to make sure that his poll numbers sink." 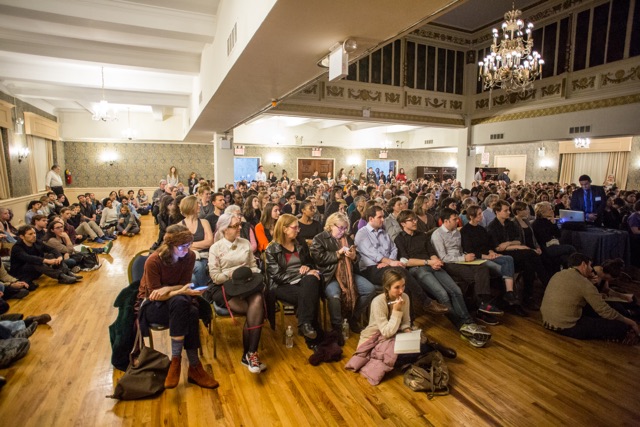 Overflow crowd watches the proceedings on a live stream upstairs from the main auditorium at Union Temple. (Scott Heins/Gothamist)

In a refrain that's become familiar, James chanted: "Say it loud, say it clear, refugees [and immigrants] are welcome here."

While much of the proceedings focused on the grim political realities facing the nation, Clarke expressed hope about the potential for progressive change. "I am optimistic. I have to tell you all it's great to be home with you," she said. "We have overcome tyranny before and we must and we will overcome the tyranny facing us today."