by Jessica Gould and WNYC Staff

“We got played,” Council Speaker Corey Johnson said on Wednesday morning at the first of three hearings on the controversial deal for a new Amazon campus in Long Island City.

Because the City Council was essentially cut out of the deal, which will purportedly create at least 25,000 jobs over the next 10 years, and as many as 40,000 jobs in 15, Johnson said the goal of the hearing was to ask the questions that the councilmembers and the public would have asked if the deal hadn’t been brokered in secret.

“This should not be a two-step tango to get you to come here and talk to us,” Johnson said, addressing the two Amazon executives and the head of the city’s Economic Development Corporation James Patchett.

The officials had barely begun speaking when anti-Amazon activists unfurled a banner and chanted “GTFO, Amazon has got to go!”

“GTFO, Amazon has got to go” as Amazon and EDC reps sworn in pic.twitter.com/pAi3128leW

Amazon would cushion the city from any looming economic blows, including the next recession, Patchett argued, and he reminded the audience that the City came close to declaring bankruptcy in 1975.

“As the head of the economic development corporation, it is my job to make sure that no city mayor ever has to weigh whether to keep police on the streets or our daycare centers open ever again,” Patchett said. “If we don’t internalize these historical lessons, we run the risk of reliving these tough times. And for my own children, and every child in New York City, that is not a risk I am willing to take.”

“Do you think it’s a public benefit to offer a way to avoid local oversight?” Johnson asked Patchett. “Whose interests did you feel like you were representing in negotiating this deal?”

“One hundred percent the people of New York City,” Patchett replied. Critics in the audience laughed.

Patchett, who said that he met or spoke with Mayor Bill de Blasio more than 10 times to discuss the terms of the Amazon deal, cited a recent Quinnipiac poll that said 57 percent of New York City voters approve of the new Amazon campus.

“You live by the poll you die by the poll,” Speaker Johnson retorted. “The polls said Hillary Clinton was going to be president. I wish they were right.” 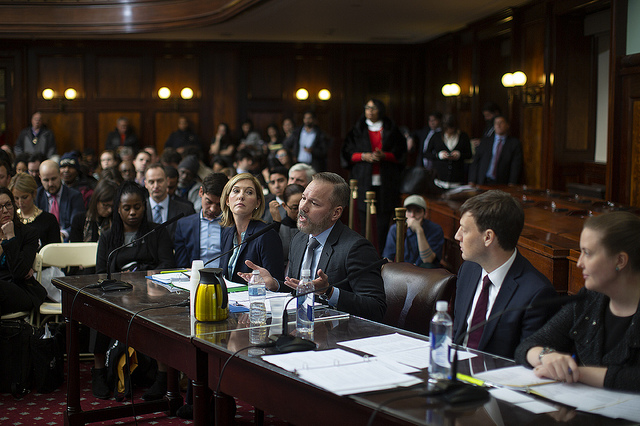 Deputy Mayor Alicia Glen said when the plans for the new campus were announced that Amazon would have “walked” if forced to go through the typical public review process, called Uniform Land Review Process or ULURP. Under ULURP, the public has a chance to weigh in and the council must approve or reject a project.

Asked whether they’d have come if they’d been required to go through the ULURP process, Amazon executives Brian Huseman and Holly Sullivan demurred.

The elected officials didn’t buy it. “You’ve taken the L in ULURP and turned it into an S,” said Brooklyn Councilmember Inez Barron.

Huseman and Sullivan testified that Amazon was attracted to the diverse workforce and talent in New York. They pledged to begin hiring more employees locally early next year, lauded the $27.5 billion in new tax revenue Amazon expects to generate for the city and state, and emphasized the $2.5 billion in community investments, including a new school, workforce training, artist workspace, and arts, tech and business incubators.

As part of the deal, Amazon is also getting nearly $3 billion in tax credits and incentives, most of which were not unique to Amazon, and could have gone to any company seeking to build a campus of this size in New York City. “You are a trillion dollar company,” Johnson said. “Why should we give you this money?”

Amazon’s Sullivan acknowledged the incentives were “a priority,” and emphasized that the incentives depended on Amazon reaching its local-hiring goals.

“We are a bit different than most companies,” Huseman said, assuring the council that the company would be a good neighbor to New Yorkers living in Long Island City. “We have onsite food services that can serve only a small percentage of our workforce, so our employees can frequent local restaurants and retail.” The company has also promised to work with a newly appointed community advisory board on infrastructure and workforce needs in the surrounding area.

One aspect of the arrangement that was unique to Amazon: the helipad, which Johnson called the “rotten cherry” on top of a bad sundae. Huseman said Amazon would be paying for the helipad itself. “I would hope so,” Johnson replied. Huseman added that they anticipate only 120 landings a year and that the helicopters would fly over the river rather than the surrounding neighborhood. “Do you realize how out of touch that seems?” Johnson asked.

Queens City Councilmember Jimmy Van Bramer, who represents Long Island City, admitted in his opening statement, “I was wrong to sign the letter supporting New York’s bid.” But he contended that at the time, he was unaware that the city would be cut out of the deal, and that Amazon would receive billions in incentives.

"The mayor and governor caved to the richest man in the world and handed New Yorkers the bill,” Van Bramer said.

Van Bramer also pointed out that a private development site next to the proposed Amazon campus owned by the plastics company Plaxall has now been rolled into the Amazon plan, meaning it will not require ULURP. The Councilmember asked the Amazon reps to commit to redirecting the $500 million discretionary grant the company is getting from the state to fund repairs for public housing in Western Queens. The reps declined to do so, and Patchett again referenced the projected tax gains to the city and state.

Asked about Amazon’s efforts to sell facial recognition technology to ICE, Huseman replied, “We provide that recognition service to a variety of agencies and government should have the best technology.” He said the company has a “positive record” on immigration, including advocating for Dreamers and green card reform.

"We think the federal government should have access to the best technology." - Brian Huseman, Amazon VP for Public Policy.

In pursuit of profit, they are willing partners in Trump's deportation machine.

Patchett admitted that he was “concerned” about reports of Amazon’s poor labor practices, and noted that the city has encouraged the retailer to work with the city’s construction unions on the build-out of the new campus. In terms of Amazon’s own workers, “bringing Amazon to New York City is an opportunity for us to engage with them about the beliefs and values of New York City” including that “unionization is important,” Patchett said.

Huseman said he “disagreed with the premise of the question that we’ve engaged in anti-union practices elsewhere.”

By his count, Speaker Johnson asked the Amazon officials on Wednesday 12 times if they’d come to the two upcoming council hearings on the deal. “I cannot commit today,” Huseman said, before ultimately relenting.

The next Council hearing on Amazon is slated for January, but has yet to be officially scheduled.

Jessica Gould is a reporter in the newsroom at WNYC. You can follow her on Twitter at @ByJessicaGould.