Wave Of Ditmas Park Robberies Has Neighborhood On Edge

A series of armed robberies at cafes and businesses in the normally low-crime Ditmas Park has ruffled the neighborhood in recent weeks, and last night, Brooklyn Borough President Eric Adams hosted a town hall meeting at P.S. 139 to address community concerns in the affected 70th Precinct.

Community Affairs Officer Lieutenant Jacqueline Bourne urged residents to register their belongings with the NYPD, in addition to offering free security surveys for businesses and homes. Those surveys include helping with "preventative maintenance," reorienting cameras to simultaneously capture street and storefront views, and upgrading to high-definition surveillance systems. Information on registered personal items—which can include everything from stereos to phones to toasters—is kept in a database, which can be accessed in the event of a home invasion or mugging.

Based on community suggestion, the NYPD will have a booth at Sunday's Cortelyou Greenmarket for that purpose, and State Assemblyman James Brennan's office (D-44) will provide a similar service.

Lieutenant Bourne also added that "based on the minimal information that we do have," the precinct does not believe that the robberies at Stratford Deli and the T-Mobile store at Flatbush Avenue and Beverley Road connected to the other restaurant robberies, which affected Lark Cafe, Mimi's Hummus, and Ox Cart Tavern.

The mood of the meeting was at times tense, with locals disagreeing passionately throughout on a number of issues, including the level of police presence in the neighborhood, the installation of street cameras, fears of a return to crime levels last seen in the '80s, and ultimately the effects of gentrification, which dominated throughout.

"I have heard numerous guns shot...and we've called 911, and sometimes it takes 20 minutes for them to get there," said one speaker, who identified herself as a six-year resident of Crown Heights and Ditmas Park. She cited several shootings in the area, including the death of Antiq Hennis, an infant shot in his stroller last September, and asked, "Tell me, where are these people on the street that you claim?" 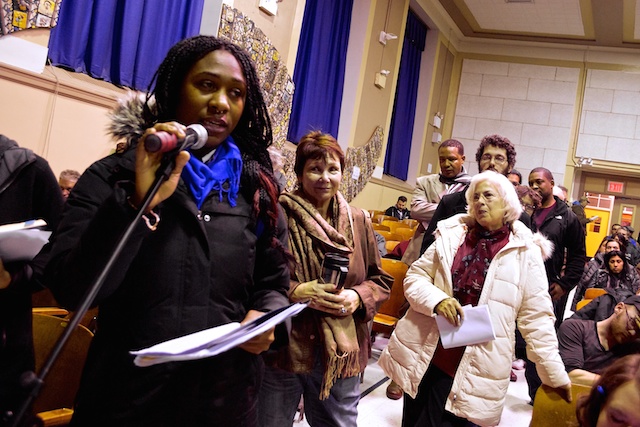 Anya Shiferson, an employee of Mimi's Hummus who was working there on night the restaurant was robbed, said the corner of Cortelyou and Argyle roads is a notoriously dangerous, and she wondered why cameras are not a presence. She added that following the robbery, the perp fled toward Argyle and Beverley in a getaway car, where no cameras could track him.

City Council member Mathieu Eugene (D-40) said that cameras had to be funded through the city budget, which won't be addressed by the City Council until February. Bourne added that businesses can apply to the NYPD for grants to buy cameras, and that the same grant office sometimes places cameras in high-crime areas based on community feedback.

"We find it ridiculous that there are no cameras on prominent blocks such as Cortelyou and Argyle," Shiferson told Gothamist earlier today. "We are issued tickets for barely missing a red light, and yet when we have rampant crime in a beautiful neighborhood like Ditmas Park, cameras are nowhere to be found."

The neighborhood's rapid gentrification was also a point of discussion, with residents speculating that resentment could have triggered the recent crime wave.

"Part of what happens, I think, when gentrification spikes is that people get pissed off in neighborhoods, and they want to take back some of what had been theirs," said Gabe Radeka. "So I think we need you as allies," she said, addressing the assembled officials, "but I think we need to reframe what community development looks like, and crime prevention."

Asked about specific steps his office would take, Adams stressed that he doesn't want to "dictate."

#armed robbery
#crime
#ditmas park
#eric adams
#nypd
#original
Do you know the scoop? Comment below or Send us a Tip