Wave Good-bye to the Heat Wave 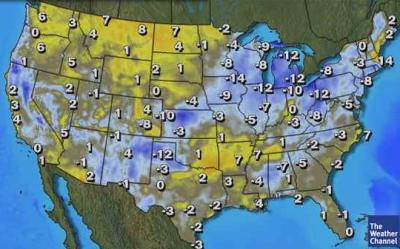 That wasn't much of a heat wave, was it? Two straight days with a high of 92 degrees barely rates mentioning. By comparision, the longest stretch of 90 degree days recorded in Central Park was 12 in 1953. More recently, in July and August 2002, there was a 22-day stretch in which the high reached at least 90 on 17 of those days.

The extreme heat is mostly gone, but the humidity has increased, making it feel totally gross if you're out in the sun. The mugginess should last until sometime tonight, when the warm, moist airmass gets replaced by one that is much less humid. Before the dry air gets here we will have to put up with muggy weather and an increasing likelihood of showers or thunderstorms. Odds are 50-50 for rain this afternoon, with better than even odds this evening. The rain could be heavy at times at the atmosphere tries to wring the moisture out of the air.

Skies will clear through the day tomorrow as the leftover moisture gets mixed into the much drier air mass. Highs will be in the seasonable mid-80s. Seasonable temperatures are expected to last through the weekend. A shower or two may occur late Friday into Saturday.

To get back to the "heat wave". Gothamist read in a couple of places this past week, most recently in the print edition of this morning's Times, that a heat wave is officially defined at "three consecutive days in which the temperature is at least 90 degrees." This puzzled us because a) we had never heard this before, and b) it doesn't make much sense. It doesn't make much sense because heat waves are location dependent. Three straight days of 90 degree weather is miserable in Maine, but would be considered almost cool weather in Arizona. A heat wave has physiological –how well our bodies respond to heat and humidity—and sociological aspects which aren't considered by the above definition.

So, we grabbed our handy Glossary of Meteorology, 2nd edition and looked up heat wave. As repeated on Wikipedia, the definition comes from A. T. Burrows in 1900! We need to do a bit more research but we're reasonably sure there isn't a one-size-fits-all official definition for a heat wave, and certainly not one that's more than a century old.