A celebrity's campaign to hydrate the masses has hit a speedbump due to its very familiar packaging. Look at this bottle of Ounce Water (puzzling slogan: "Did you get OUNCED today?"), what do you see? Some residents of Brooklyn's Breukelen Houses see a 40-oz. malt liquor bottle, a marketing tactic that strikes them as both racist and apt to encourage underage drinking, even alcoholism. 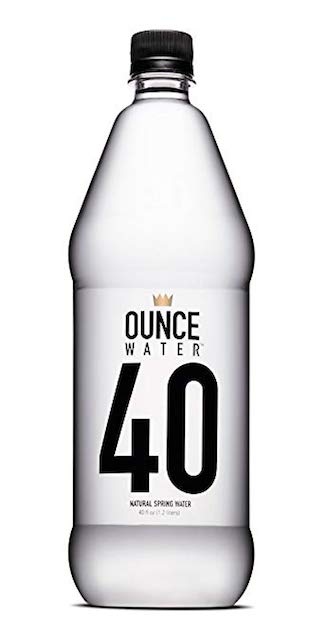 Just look at it. (via Amazon)

"In a community that has been ravaged by alcohol and drugs, we are confused as to why someone would create a product that so closely resembles a malt liquor bottle," reads a letter from the activist group Breukelen RISE to Ounce Water, reported by the NY Daily News. "We cannot get behind this product staying on the shelves in our community."

For the unfamiliar, malt liquor is a cheap, hyper-alcoholic (at least by the prevailing standards during its mid-century development) beer that has historically been marketed to black consumers, particularly in low-income neighborhoods. RISE has successfully lobbied Canarsie's Food World Supermarket to pull the 40-ounce water bottles from its shelves, because yeah, I mean look at it.

Ounce Water currently comes in two sizes: 20 ounces and 40 ounces, with a 10-ounce option in the pipeline. The company's founder, Theo Rossi—whom you may remember from FX's Sons of Anarchy—claims he didn't notice the similarity between his 40-ounce water bottle and malt liquor's most recognizable vessel. His mission, he explained in an Instagram video, has always been to get everyone to drink their daily 80 ounces of water: breaking that intimidating quantity down into easily measurable units simplifies the process. Encouraging unhealthy drinking habits was "the total opposite of what I was trying to do," Rossi—who's been sober for nearly 10 years—continued. He just wanted to help you with your hydration math and also, "make [the product] look, like, super cool." Like 40s!

"Total apologies to anybody who would be offended by the shape of a bottle," Rossi concluded. "There's just water inside it. I just want you to drink more water."

With so many "oops we didn't realize it was blackface" apologies piling up recently, it seems like high time marketing teams apply greater scrutiny to the "super cool" cultural touchstones they reference when peddling their products. Whatever Rossi's intention, the resemblance here isn't particularly elusive.