On Friday night, just after 9 p.m., a car caught fire and then exploded on Bedford Avenue in Williamsburg. The car, parked between S. 1st and S. 2nd Streets outside Lucky Dog bar, was apparently victim of a transformer explosion. (Con Ed has not yet responded to request for comment.)

One witness tells us, "I saw flames licking up from a blown transformer in the street. Parked on top of it, the back end, a BMW — which caught on fire. The four tires exploded, and then the gas tank. FIre Dept was on scene instantly." He added that after the firefighters controlled the situation, when he asked one if the car's owner appeared. To which the firefighter replied, "Nah, he's MIA. Its gonna be sad when he shows up, nice BMW."

Another resident, who took the video above, said, "We lost power to our building as well as the building next to ours, including Du Mont burger. Nobody was hurt. Con Ed emergency crew was on the scene, power restored in my apartment by 3:00 a.m."

And here's a photograph of the car yesterday: 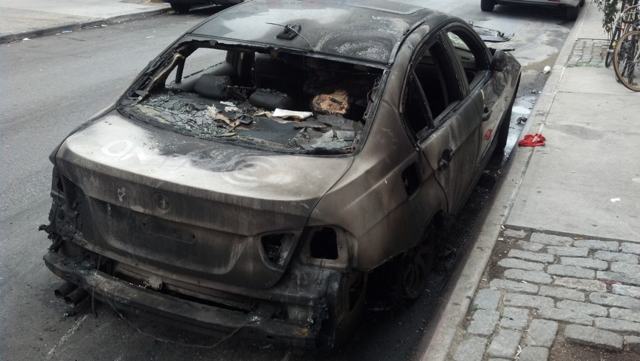 A tipster told Miss Heather that it was his friend's car and it wasn't fully insured.