Maybe you have heard that a certain Georgetown Prep graduate Brett Kavanaugh has a few controversies to publicly confront, and maybe you—like me—have been looking forward to watching this Supreme Court nominee squirm as the sole bright spot in this 10,000-year week. Maybe you would simply like to watch a panel of old Republic men try to keep themselves in check around the "female assistant" they hired to improve their optics. Maybe you live for the political process, or the drama, I don't know, I don't know your life.

If you are one of six in 10 Americans who plan to monitor this shit with unblinking beady hawk eyes, and you clicked, then I assume you're wondering when the Kavanaugh hearing will begin. I'll save you a Google search: Kavanaugh and the first woman to publicly accuse him of sexual misconduct, Christine Blasey Ford, will appear before the Senate Judiciary Committee starting at 10 a.m. I cannot say how much time you should budget for this endeavor, as time has lost all meaning to me.

Just to quickly recap, because it would be a shame for you to walk into this hellscape unprepared, Kavanaugh has been accused of sexually and verbally abusing multiple women during high school and college. Blasey Ford, who testifies today (and whose testimony you can read here) tipped off press and Senators to her experience before Trump named Kavanaugh as his SCOTUS pick. She alleges that Kavanaugh, then 17, pounced on her at a house party and, along with his BFF Mark Judge, pushed her into an empty room. Covering her mouth so no one could hear her scream, Kavanaugh pinned her down, she says, and tried to rape her. She only got away because Kavanaugh and Judge were wildly inebriated. Kavanaugh denies this, and you can read his (shorter and more vague) testimony here. 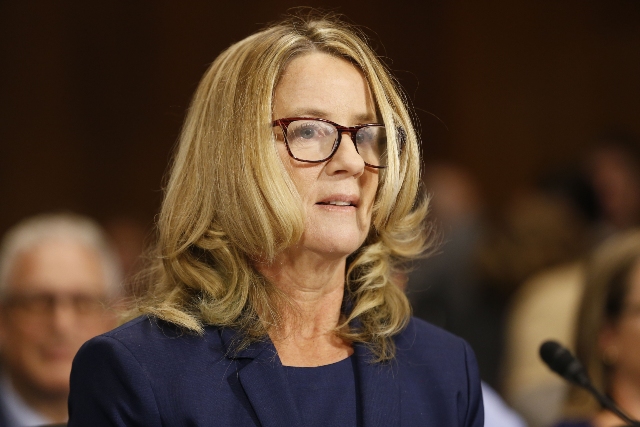 Dr. Christine Blasey Ford arrives before the Senate Judiciary Committee hearing on the nomination of Brett Kavanaugh to the Supreme Court. (MICHAEL REYNOLDS/EPA-EFE/Shutterstock)

The Senate Judiciary Committee will not hear directly from Kavanaugh's two other accusers today, although you can bet their allegations will come up. Deborah Ramirez says that, as freshmen at Yale, she and Kavanaugh wound up at the same party, and Kavanaugh eventually took advantage of her drunkenness: While she was lying on the floor, he stood over her and shoved his penis in her face, telling her to "kiss it." Kavanaugh denies this, and has said his fellow students—his fellow alleged partygoers—confirm it never happened. They don't, though, not entirely. He has also stated that, because he remained a virgin until well after graduating high school, there is no way he could have tried and failed to have sex with anyone, or waved his dick at another student.

Arguably the largest bombshell to drop so far, though, came in the form of Wednesday's sworn affidavit, currently under review by the Judiciary Committee. In it, government employee Julia Swetnick states that in the early 1980s, Kavanaugh and Judge habitually helped orchestrate the group rape of multiple girls at parties, slipping them alcohol and drugs with the explicit intention of incapacitating them. In addition to getting wasted and berating women who told him 'no,' Kavanaugh allegedly became physically aggressive on many occasions. And notably, Swetnick said, Kavanaugh and Judge were present for—if not necessarily participants in—her own "train" rape, under the influence of the Quaalude-type substance she believes someone slipped into her drink.

Kavanaugh has characterized this allegation as "Twilight Zone" stuff, but...perspectives from people who knew him—lived with him!—in his younger years place this kind of behavior well within the realm of possibility.

I will be watching the hearing, but given all that, I will also be screaming into the sun. Come join me! 10 a.m. Eastern Time all across the Internet.