The city will remember and honor the thousands of people killed on September 11th, 2001. The names of 2,983 people—the victims who died in a crash in Shanksville, Pennsylvania; the Pentagon and the World Trade Center; plus the six victims from the first World Trade Center bombing on February 26th, 1993—will be recited today by family members of victims at the 9/11 Memorial Plaza.

There are six moments of silence: Two for when the planes hit the towers, two for when each tower fell, one for the attack on the Pentagon and one for Flight 93, which crashed in Shanksville. The first moment of silence is at 8:46 a.m., and the ceremony, which is being livestreamed (see below), will conclude at approximately 12:30 p.m.

Here is the schedule of ceremony:

(Houses of worship will toll their bells throughout the city)

Families of victims of 2001 and 1993 attacks will begin reading the names in pairs.

9:37 AM Moment of silence (observance of time American Airlines Flight 77 struck the Pentagon)

9:59 AM Moment of silence (observance of time of the fall of the South Tower)

10:28 AM Moment of silence (observance of time of the fall of the North Tower)

President Donald Trump will be attending the anniversary ceremony in Shanksville, PA.

The 9/11 Memorial Museum will be open for family members only, beginning at 7 a.m. 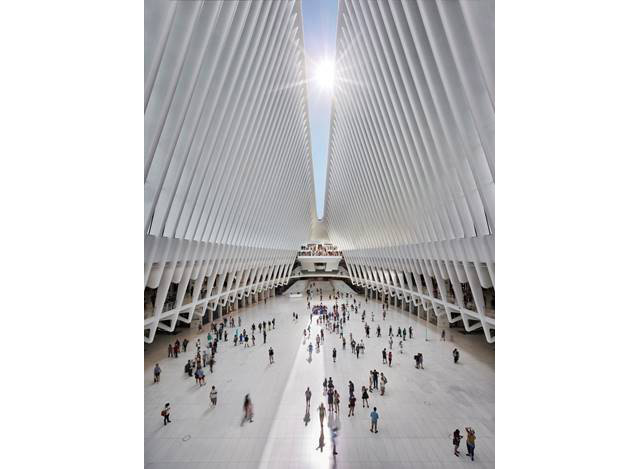 The Way of Light (supplied)

The World Trade Center Transportation Hub oculus will open its roof to honor the victims of the attacks at 10:28 a.m. Architect Santiago Calatrava designed the hub so that on September 11 at 10:28 a.m. every year, the sunlight will make its ways across the Oculus floor on the building's axis.

Tribute in Light will return tonight. The lights will go on at sunset (7:12 p.m.) and will fade away at dawn.

Now, 17 years later, there are worries that deaths of people near Ground Zero, such as first responders, from 9/11-related illnesses will soon outpace the deaths from the day of the attacks— for instance, a blood cancer precursor has been found in 9/11 firefighters—which could mean the 9/11 Victims Compensation Fund runs out of money faster. The Daily News reports: "As of June, 88,484 first responders and survivors have registered with the World Trade Center Health Program. Of that number, roughly 10,000 have some form of cancer that has been certified by the program."