Last night, Mayor Bill de Blasio made his debut on The Nightly Show, where he happily allowed host Larry Wilmore to clown him. In his opening remarks, Wilmore told the audience, "De Blasio is fighting to save New York City’s middle class—all twelve of them. We’ll also discuss the mayor’s relationship with the NYPD, which has more beef than a New York City hot dog."

Before introducing de Blasio, Wilmore riffed on big issues: The weather—"Thanks de Blasio. I don’t remember it being this cold when Bloomberg was mayor"; The income gap—"You know what they say about New York? 'If you can make it here, you can make it anywhere.' Or, as the saying has been shortened to nowadays, 'You can’t make it here. Seriously, man, try Austin.'"; Manspreading—"The city is doing so well that now we're nitpicking the male thigh gap."

When de Blasio appeared, Wilmore noted that he campaigned on "the tale of two cities," and then asked if his first year was the "best of times or the worst of times." Naturally, de Blasio said it was "the best of times in terms of making real change," name-checking paid sick leave, universal pre-K, free after school for middle schoolers and and affordable housing. There was also a clip of a homeless man, who Wilmore said "looked like he could be on Wall Street." Wilmore asked de Blasio what he would do about the homeless population, leading the mayor to explain how there are tools—like apartment subsidies—to try to keep New Yorkers in their apartments.

De Blasio did talk about his issues with the police. From the press pool report:

So, about the police: “How’s that beef?” Larry asked. “Is it like a west coast, east coast thing?”

“No, thank god,” BDB replied. “A lot of work went into everyone finding a way to get onto a better page.”

Larry: “You got in trouble for talking about your biracial son -- or, as I like to call him, your black son. If you’re having a talk with your son about the cops, that’s your black son. It’s not like the cops are going to pull you over and say, ‘Freeze! Oh, wait, are you mixed or something?’”

BDB: “The first thing that astounded me about the whole reality is, i spoke about these issues when i was running for mayor. It wasn’t a new thing. we did a TV advertisement talking about the reality of the conversations we had in our family. A young man of color today needs to have that conversation in his family. It’s something that everyone knows. And it’s not a comment that’s disrespectful to the police. We deeply respect our police, we need our police to protect us. But it’s a comment that refers to our history and some things we still haven’t worked out. That’s the reality.” 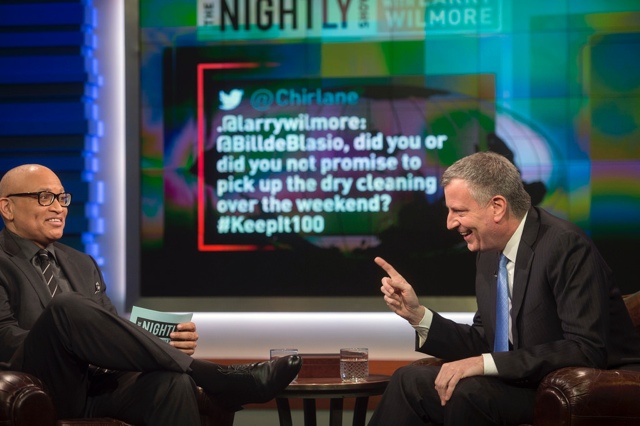 Chirlane made a cameo, via a Tweet (NYC Mayor's Office)

During Wilmore's "Keep It 100" (as in, keep it 100% real) segment, Wilmore went through some Tweets, including one from First Lady Chirlane McCray. The Mayor explained, "I was ordered to pick up the dry cleaning. I am too scared to defy that order." Wilmore said, "So what you’re saying, Mr. Mayor, is that Black Wives Matter?"

And #TheDress was trotted out. From the pool report:

Larry says: “It’s time to keep it 100. I’ve been waiting to ask you this question for awhile. And I really want to get your honest answer. Remember, you have to keep it 100 percent real........"

“What color is this dress?”

The audience laughed as BDB stared at The Dress, projected onto a screen behind him. He looked perplexed, and a bit confused. “Take your time, Mayor,” Larry said.

Some groans from the audience. BDB smiled sheepishly, biting his upper lip, Clinton-style.

Larry: “And that’s what wrong with this city, mayor.”

The audience, asked about the color, shouted out a variety of answers. Larry was unimpressed -- “I’m throwing tea at the whole audience" -- before turning back to the Mayor.

“You don’t see blue and black?”

“Yeah, it looks a little green.”

So at least we know de Blasio isn't staying up late keeping abreast of Internet memes.

#bill de blasio
#larry wilmore
#mayor de blasio
#The nIghtly show
Do you know the scoop? Comment below or Send us a Tip