Hey, did you hear that presidential candidate Bernie Sanders has been doing stuff around New York City? And that he's from Brooklyn? It's true! And now it's time for even more Bernie coverage, because he's about to embark on a series of huge Get Out The Vote rallies, starting with one in Washington Square Park tonight.

The normally bustling park was closed off by the police and Secret Service this morning. By noon, news trucks were lining the streets as cops put barriers in place. A sound check was being conducted (a mix of guitar playing and easy listening) as Parks workers raked the lawn. At the south end of the park, Sanders supporters were already waiting to enter, many hours before the gates open at 5 p.m.

At the head of the line was Diane, a Long Island resident. "I've been here since 7 a.m.," she said, explaining that she went to the Bronx rally but got there late and was in the overflow area (which Sanders did visit). "I really wanted to be close this time."

She admits she's surprised by her passion for the senator from Vermont. "I've never been politically involved before," but Sanders "wants to bring back the middle class." She also cited his desire to address to "imbalance between the haves and the have-nots." 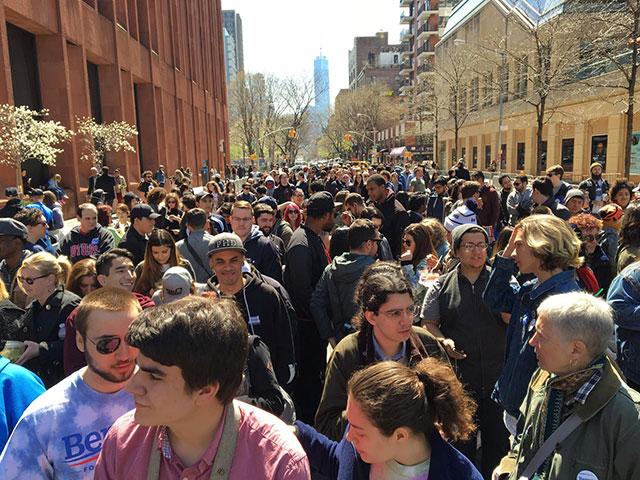 As for Hillary Clinton, Diane said she used to like Hillary "when she was out fighting... but now she's become part of the machine." Bernie, on the other hand, is someone "people love... people relate to him. He's honorable."

Sanders's perceived connection with regular Americans is also what inspires Kathleen Menegozzi. Wearing a camouflage jumper—with "Bernie's Soldier" and a Bernie caricature inside a heart on the back—she and fellow supporter Ada Vargas were scouting locations for a mural. "There are endless reasons" why Menegozzi has been Berning since September, but education was a big one, "I went to CUNY and it was pretty affordable, but college should be a basic human right."

Vargas, who sports a Bernie outline tattoo on her left upper arm, said, "the more I learn about him, the more I love him. He's not just talking the talk—he's walking the walk, too."

Pat Gross, who lives in the neighborhood, was walking her pug Ajax. Usually they visit the dog run in Washington Square Park, but it was blocked off for the rally. While Ajax was taciturn, Gross called the lockdown "a fair inconvenience." She isn't attending the rally, but her son and brother will be there. "I'm voting for Hillary."

At By Chloe, the popular vegan restaurant a few blocks south, an employee said she'd try to go to rally after her shift ends at 5 p.m. "I heard Vampire Weekend will be there. But," she continued, "I'm more excited for Sunday's rally in Prospect Park"—because Grizzly Bear will be there.

#berners
#bernie sanders
#election 2016
#hillary clinton
#washington square park
#original
Do you know the scoop? Comment below or Send us a Tip