A Washington Heights man says he was physically assaulted by a man yelling offensive homophobic slurs early this morning. Chris Oates, 34, was walking his dog around 8:30 a.m. Friday in front of his apartment on Riverside Drive near the GW Bridge when a man in his late 20s/early 30s started yelling at him; the assailant proceeded to punch him in the face and threw him to the ground while hurling gay slurs at him. "The cops came, but because the guy didn't answer his door they couldn't do anything," said Oates. "That's the key to avoiding prosecution for a hate crime in NYC folks. Just don't answer your door."

Oates told us that he was standing with another dog owner from his building when the "aggressive and hostile" man yelled at him about his dog: "She’s a mutt that just stood there and watched me get beat up. So obviously there was no reason for him to be yelling about her, she didn’t even do anything to him while he was beating me up. That’s about as unprovoked as it gets."

When the man called him a "faggot" and got in his face to shout at him more, Oates smelled alcohol on his breath, and asked, "Why are you harassing me? You’re drunk. Are you a crackhead?” Oates said the man responded, "Who are you calling 'crackhead,' faggot? At least I don't suck dicks for a living." Then the man punched him in the mouth and knocked him to the ground, where they scuffled for awhile. Oates says he injured his knees, elbows and mouth in the fight: "He didn’t really hit me that hard, I think he was too drunk to...so it could’ve been a whole lot worse." 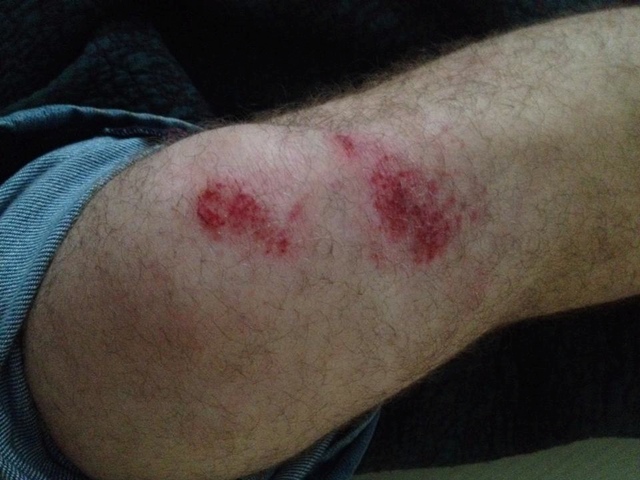 Eventually Oates was able to wrestle free and call 911, and another witness came by and tried to help. When six officers arrived minutes later, the assailant was already gone: "When he was walking away, he was walking away backwards, and he had his shirt lifted up and he was like 'Here’s something for you to jerk off to later.'"

But the second witness apparently recognized the man—that witness said "apparently he’s squatting in his sister’s apartment and he’s a menace"—and led police to the apartment...where no one answered the door. Oates has spent the rest of today calling police and trying to find out what's going on, since police never took a statement from him or from the witness. "I don’t know what’s going on," he said. "I’m just trying to have faith in the system. But you know, because it didn’t seem that anybody was that committed to follow-up, I just have some concerns."

This assault comes just as a Brooklyn man accused of beating a man while yelling anti-gay slurs escaped an assault charge because of “technical issues." Now, the cops want to charge that suspect with assault as a hate crime, but they can't find him.

Oates has lived in the neighborhood for three years with his husband, and has never experienced any incident like this before. "I’m from the South, I moved from the South with my husband so that we could have a nice, honest life, and a fair life, and a life where things like this don’t happen to people just because they’re gay," he said. "So I’m kind of shocked because you know...this is New York."