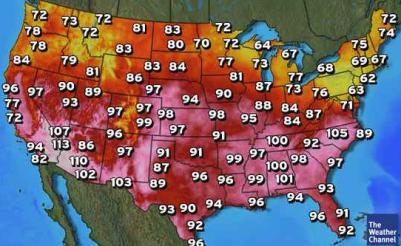 There are a lot of obscure weather and climate statistics and records. Two of Gothamist's favorites are the record low high temperature and the record high low temperature. Yesterday we had one of the former. The combination of being in a cold air mass and under heavy cloud cover also tied 1911 (WCBS didn't give the exact date) as having the lowest high temperature of any day in August.

More fun facts! The high was 23 degrees below normal, the greatest below normal Central Park has been more since early March, and only six degrees away from matching the record low for the day! We did some calculations and found that yesterday's chill took nearly a degree off of August's average temperature. Central Park went from 0.88 degrees below normal for the month to 1.64 degrees cooler than average. This week has been so chilly that Gothamist has had to wear long pants to work for three straight days. The agony, the agony…

There is some morning drizzle to contend with today but it is already warmer than yesterday. Instead of having a high more appropriate for late October it should warm up to the upper-60s, which is more like early October. The warming trend will continue through Saturday, by which time mid-summer weather will have returned. Tomorrow's mercury should climb into the upper-70s. Friday's highs will be comfortably in the mid-80s, and the temperature may approach a humid 90 on Saturday. The days should remain dry but there is a slight chance of a shower tonight, light rain tomorrow night, and showers or a thunderstorm Friday and Saturday night.

The heat forecast for Saturday is the tail end of a heat wave that has brought ten straight days of highs above 100 to Memphis, and is blamed for 49 deaths in the Midwest and Southeast. More rain is expected in Ohio and Wisconsin today, where rain and floods have already killed 22. And, oh yes, Hurricane Dean, the third most intense Atlantic hurricane to ever make landfall caused a lot of damage as it passed through the relatively unpopulated southern Yucatan peninsula yesterday. The storm is regaining a bit of strength, and battering a few oil platforms in the Bay of Campeche, before it is expected to come ashore between the cities of Tampico and Veracruz this afternoon.

Map of yesterday's high temperatures, showing New York (LaGuardia) as one of the coldest locations in the lower 48, from weather.com.