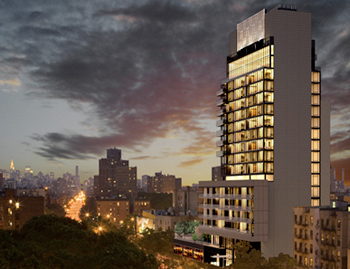 Hotelier Jason Pomeranc is creating posh microcosms of gentility all over the city. Since his luxury boutique hotel brand launched seven years ago with the opening of 60 Thompson, Pomeranc has opened two more New York properties, 6 Columbus and Gild Hall. Now, everybody's wondering when his next venture, Thompson LES, at 200 Allen Street will swing open its doors to what The Observer says has become "a no-man’s land of rats, dirty streets and prolonged high-rise construction projects."

Certainly not the image one perceives upon arrival at the hotel's swank website, which greets visitors with a revolving soundtrack of pulsating electronic drone and jazz beats, and states "Opening: Spring 2008." A week into the season and there have been no concierge sightings on the block. But here are a few details about the place.

Just imagine Warhol's delight of having dozens of rich, bronzed beauties breast-stroking their way across his face.