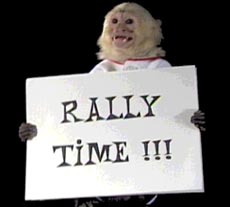 Stock futures are up 4% after as continued assurances and actions from world governments and central banks. Reuters proclaimed "Money Markets Ease on Unlimited Dollars Pledge," as Britain and Germany are committing "billions in taxpayers funds ...to prop up banks."

World markets are doing well: Hong Kong's Hang Seng index ended 9.6% higher and Sydney's S&P/ASX 200 was up 5.6% (Tokyo's Nikkei was closed due to a holiday). London's FTSE 100 is up 4.86%, Paris's CAC 40 is up 6.1% and Frankfurt's DAX is up 6.9%. Axa Investment Managers strategist Aurore Wannesson-Raynaud told Bloomberg News that governments and central banks "brought out the heavy artillery. It's possible that the worst is behind us. We should see better days ahead."

However, Fortis Global Markets senior equity strategist Philippe Gijsels said to the NY Times, We’re extremely cautious. This looks like the start of a typical bear-market rally... To repair the market will take some time. The problem is that the financial problem has now become a real economic problem. The damage has been done.”