After the Dow Jones industrial average fell 504 points--the most since September 17, 2001--yesterday upon news of Lehman Brothers's bankruptcy, the sale of Merrill Lynch, and A.I.G.'s troubles, Wall Street is in for another difficult day. Asian stock markets were down sharply: Tokyo's Nikkei was down 5%, Seoul's Kospi was down 6.1% and Hong Kong's Hang Seng fell 5.9%.

The Wall Street Journal reported, "Steps unveiled by the Federal Reserve to expand its emergency lending arsenal did little to snap the sense of gloom." Indeed, the NY Times called out how Bush's remarks did little to soothe nerves in its front page headline. 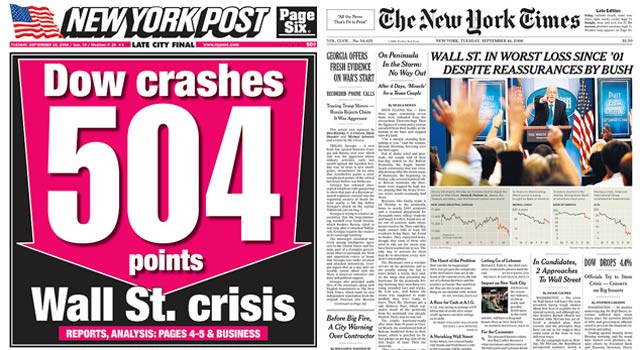 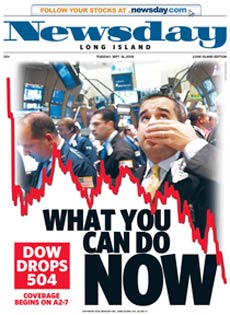 Wachovia's chief market strategist Alfred E. Goldman said, "We have a very, very nervous market, and folks hate uncertainty. They've been waiting for the other shoe to drop, and two of them dropped on Sunday." City Comptroller William Thompson said, "Today is a sad and stunning day. Thousands are losing their jobs; many are unsure about their future."

However, Mayor Bloomberg tried to remain upbeat, reminding, "New Yorkers have gotten through the ups and downs of Wall Street before, and we will get through this." Treasury Secretary Henry Paulson added, "What we are going through in the short term doesn't make anything easier. But in the longer term, it's going to make things better, because we've got excesses we need to work through," and noted the "soundness and resilience of the American financial system."

Right now, Barclays may be in a deal to buy parts of Lehman Brothers, according to a statement from the British bank, but the statement also says, "there can be no assurance that the discussions will result in an agreement." The WSJ says Lehman executives hope jobs and operations can be preserved in New York.

AIG shares fell 40% before the market opened this morning. Moody's and Standard & Poor's downgraded AIG's credit, and CNBC reports that the Federal Reserve "has hired...Morgan Stanley to review options for AIG."