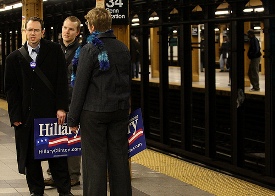 In her successful attempt to appeal to working class primary voters, Senator Hillary Clinton has been catching heat from Wall Street. The Sun notes that yesterday, her camp dawdled for 24 hours before correcting reports that she had asked an audience in Indiana: “Why don’t we hold these Wall Street money-grubbers responsible for their role in this recession?” The quote angered some in the financial industry; after all they're not money-grubbers, they're money-hoarders.

Clinton's team belatedly explained that she'd referred to them as money-brokers, but long before correcting the misquote, Clinton adviser Howard Wolfson made a distinction about the grubbers in question: When asked by the Sun to explain why so many of Clinton's campaign contributors are Wall Street money-grubbers, and that her daughter Chelsea works at a hedge fund, Wolfson said, "'Our supporters aren’t the grubbers.'"

Humbug, says Charles Payne, one offended Wall Street CEO: “If America is still the land of milk and honey it’s because the fertilizer comes from Wall Street. There is something wrong when it’s okay to make $100 million for giving speeches, yet when you help to facilitate the growth of America, which in turn employs millions of people, you can be a villain if you are paid too well.”

Photograph of Clinton supporters by Daniella Zalcman on Flickr