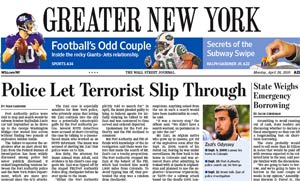 The Wall Street Journal's "NY Times-killing" New York section launched today. Online, the "Greater New York" offering has a mix of free and paywall articles. For instance, the lead story, about subway bomb plotter Najibullah Zazi getting waved through the George Washington Bridge checkpoint by Port Authority cops, is free, but the story on NY State considering emergency borrowing is subscriber content. And the WSJ apparently thinks its readers take the subway but are confounded by Metrocard swiping, hence an article on Metrocard swiping (free).

Daily Intel examined the section, too, "And though we knew the paper was going after the Times' swishy Upper East Side readers, we wouldn't have guessed it would pander so directly, with stories like 'Rats Mob the Upper East Side.'" As for advertising, Reuters says that local businesses were offered full page ads for the bargain basement price of $19,000 (list rate for WSJ is more like $90,000-100,000, though discounts can apply for different advertisers) and maybe even a free full page ad in the Post: " Dow Jones source, who spoke on condition of anonymity, said only a few New York area businesses not currently advertising in the Wall Street Journal or the New York Post were being offered the discount."

So as our welcome gift to New York, we pass on a few helpful hints to our Journal colleagues: the Dodgers now play in Los Angeles, Soho is the acronym for South of Houston, Fashion Week has moved to Lincoln Center, Idlewild is now JFK and Cats is no longer playing on Broadway.
If you happen to know anyone who works for the Journal's new section and he or she wants any additional information about the greater New York region, tell them to check out NYTimes.com's always very helpful archive.