Walk Like A Penguin Or Perish On The Ice

Today's a great day to be a personal injury lawyer but a lousy day to be a human being, at least one who is required to travel anywhere in NYC. The good news is that you don't have to swim through curbside slush lagoons, because they're all frozen over. The bad news is that you're going to slip and fall through the ice, and then only your support for public radio can save you.

Just saw a woman eat it on the ice but her WNYC tote broke her fall. Public radio is there for you today.

It's so cold and slick out there that a Bushwick garbage truck just rolled over on its side and gave up on life. One person suffered minor injuries, and we'd love to know how they're going to get that truck up on its wheels again.

This garbage truck appears to have suffered the wrath of iced roads on Bushwick Ave near the Jackie Robinson Pky pic.twitter.com/8RhnjouFoK

The wind chill will make temperatures feel between 0 and 10 degrees. The National Weather Service is warning everyone to beware of "SIGNIFICANT ICING" this morning, and that caps lock is merited. Dead ass. Black ice is pervasive on roads and sidewalks, so you're going to want to bust out your most humiliating penguin walk today: 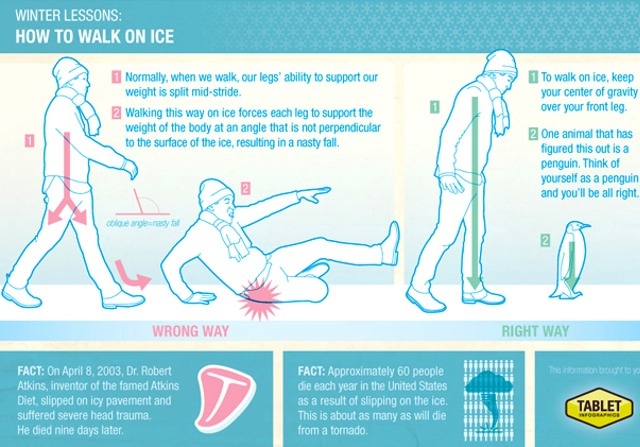 The MTA website says icy conditions forced B trains to run local in both directions between Brighton Beach and Prospect Park this morning. Signal problems and other incidents have also caused delays on numerous subway lines, including the E, F, L, 1, 4, 5, 6 and 7 lines, but it's unclear how much of that is weather-related.

This morning New Jersey is a frozen wasteland. Normally it's just a wasteland. #GottaLoveJersey

And at least all this ice has made Central Park a much better place to be:

#black ice
#central park
#flash freeze
#ICE
Do you know the scoop? Comment below or Send us a Tip