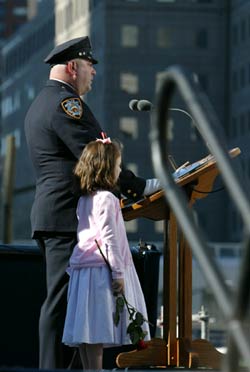 After the outcry from families of September 11 victims as well as other members of the public, WABC 7 reversed its decision not to air the reading of 2,749 September 11 victims' names by yesterday afternoon and will now air the ceremony in its entirety.

WABC 7 news director Kenny Plotnick had originally explained that the move would have given its audience a choice - and that the entire reading could be seen on the digital channel as well as online - but that didn't sit well with victims' families, who believed that the move to air Live With Regis & Kelly, Rachael Ray's show, and The View on channel 7 was motivated by ratings and money. After deciding to air the reading once again, Plotnick told the Daily News yesterday, "I spoke to families, we got some e-mails People were upset and confused... Most of the families were telling us they can't get the digital channels. If they can't get it on Channel 7, they can't get it at all."

Plotnick also told the AP, "I felt a lot of pain in these conversations that I had. That's now our intent, to hurt our audience. We were not cutting our coverage. All we were doing was changing the venue." Right - and expecting people to have digital cable or decent connections to stream hours of telecast.

This became an opportunity for all other news stations - WCBS, WNBC, WNYW (the Fox channel), WWOR, and WPIX - to emphasize why it's important to air the reading. WPIX news director Karen Scott said, "We're doing this for the community that we live in. It touched a lot of people's lives in the tri-state area. We needed to do a service for our viewers."

Yesterday, we found that 84% of our readers thought that WABC 7's decision to take the reading of the names off the air and moving it to digital and online was understandable, which seems to indicate some 9/11 fatigue.

#9/11
#city
#daily news
#fox
#live
#money
#new york
#news
#News: NYC
#people
#police
#rachael ray
#september 11
#the view
#wabc
#wcbs
#wnbc
#wpix
#WWOR
Do you know the scoop? Comment below or Send us a Tip
A new Gothamist is coming! We’ve moved comments over to our beta site. Click here to join the conversation and get a preview of our new website.