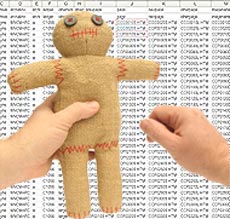 Last month, the NY Times found that an actuarial consultant who reviewed legislation pending in the State Legislature also had financial ties to labor unions. The consultant, whose expertise was used to examine the financial impact of bills (like retirement, pension benefit bills), even admitted he skewed his analysis to support unions. Now, the city has found the consultant's work underestimated costs by $500 million.

The Times reports the independent actuary and Mayor Bloomberg's office found that "11 of the more than 50 bills vetted by Mr. Schwartz that have become law since 2000 will result in" approximately $60 million of additional costs Jonathan Schwartz, who had recently projected costs associated with union-backed bills regarding NYC pensions, told the Times last month his work was "a step above voodoo."

Schwartz said when he was an actuary for the city, he would make "things look as expensive as possible. As consultant for the unions, I go to the part of the range that makes things as cheap as possible, but I never knowingly go out of the range.” Bloomberg's spokesman said, “What is increasingly clear is that the city has been saddled with tens of millions of dollars in hidden costs due to Albany’s broken process."

How broken? Well, in the first Times article (May 16), Assemblyman Peter J. Abbate Jr. (D-Brooklyn), who sponsored a union-backed bill, acknowledged, "[The union] drew up the bill; they went to Jonathan Schwartz...We assume he comes up with the real number. He was hired by them." Yeah, screw checks and balances!