Volunteer for Obama or McCain, A Totally Fair And Balanced Guide 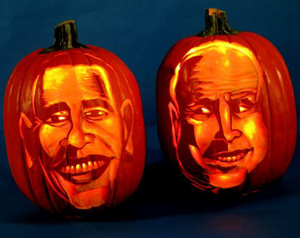 Woah, can you believe the election is only four days away? And even though that Obama has been busy making sure the drapes match the carpet in the Oval Office, a Fox News poll shows the two candidates almost tied! So if you want to volunteer to support the candidate of your choice—whether it be the bitter old warmonger on death's door and his demagogic running mate, or the most inspiring, perspicacious American politician in generations—here are some ways you can get involved.

It's a foregone conclusion that New York will be blue as Baby Smurf on November 4th, but don't tell that to the New York Young Republican Club; they'll be "celebrating victory for the GOP locally and nationally" on Tuesday night at the Women’s National Republican Club. We tried calling in order to laugh at them and also find out how you, the only McCain supporter reading this, can volunteer, but the number (212-465-3377) is disconnected. Not that that means anything!

The official New York for McCain website has contact info if you want to volunteer; we put a call in requesting details and got the voicemail of an elderly man saying, "Is this on? Er, how does this work? We're not here to take your call because we have to remain in hiding. To volunteer, please send cash. And cyanide pills!"

Okay, on to our hero, Barack Obama, president of hitting that ass. The New York State Obama campaign is incredibly organized, and here in the city they've set up phone banks running all the way through Tuesday. There are "mega call centers" and house parties in all five boroughs where you can turn your anxiety into activism by calling voters in battleground states. (Or you can even do calls from home.) One enthusiastic reader who participated last night writes, "It was SO FUN and fascinating. I'm going to do it again this weekend! It was really just amazing and I'm still on the adrenaline!"

And Brooklyn for Barack has been organizing weekend bus trips to Philadelphia and will continue through election day, when they'll be participating in a massive get out the vote operation. Here are details on the bus trips, some of which are sold out, but if you've got wheels it's only about an hour drive. And Move On is organizing volunteers to go to Pennsylvania, too. GOTV, baby, GOTV!

#calling
#campaign
#city
#election
#get out the vote
#GOTV
#how to
#information
#mccain
#new york
#nyc
#obama
#phone banks
#swing state
#volunteer
#where
Do you know the scoop? Comment below or Send us a Tip