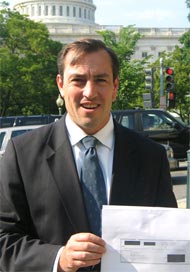 Congressman Vito Fossella made two public appearances last night, one at a Gracie Mansion dinner for the NY Congressional delegation and another at a Conservative Party dinner in Staten Island. Staten Island Borough President James Molinaro felt Fossella's appearance meant the embattled representative would run for re-election, "It makes me think that he's a candidate. Why else would he bother?"

One Democrat who attended the dinner agreed and told the Daily News, "This is a clear indication to me that he's not only not going to resign, but he's likely running for reelection. If he could stand up in that room, he could stand up anywhere. I have to give him credit. He's definitely got b----." Dude, tell us something we don't know--having a love child with a girlfriend in Virginia while married with three children in Staten Island shows cojones, too!

Fossella only stayed about 20 minutes to work the room and even received some applause. The Advance also has a story on how Fossella's Congessional website currently has no details about his family, unlike its previous incarnations and the websites of other reps (for instance, Rep. Charles Rangel mentions wife Alma and how they have two kids) . A spokesperson says the family Fossella was removed from the site for "safety reasons," but it also suggests marital troubles.