Vito Fossella Admits to Having Love Child in Virginia 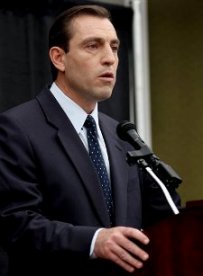 Yesterday Representative Vito Fossella said he would make another announcement about his DWI arrest today, and it was quite the bombshell for the Staten Island GOP machine: He admitted to having an affair with retired Air Force Colonel Laura Fay and fathering a three-year-old daughter with her. Here's his statement:

I have had a relationship with Laura Fay, with whom I have a three-year-old daughter. My personal failings and imperfections have caused enormous pain to the people I love and I am truly sorry. While I understand that there will be many questions, including those about my political future, making any political decisions right now are furthest from my mind. Over the coming weeks and months, I will to continue to do my job and I will work hard to heal the deep wounds I have caused.

Fossella is up for reelection this November; before this announcement, the Sun reported that the "campaign arm of the national Republican Party is refusing to support him publicly."

Fossella's personal life came under scrutiny after he was arrested for driving with a blood alcohol level twice the legal limit (he had a 0.17)--Fossella called Fay to pick him up from the Alexandria, VA police station. And, according to the police report, initially claimed he was driving home to see his sick daughter on Grimm Street--Fay lives on Grimm Drive. Former Staten Island Borough President Guy Molinari told the Advance, "He's in a very difficult mood...He's just in a period of trying to do the right thing....It's difficult for Vito, difficult for Laura Fay, and difficult for Mary Pat."

A source told the Post that Fossella's wife Mary Pat, the mother of his three other children, will "not stand by her man" and would likely leave him. And Mayor Bloomberg was questioned yesterday about Fossella (Fossella supported Bloomberg's mayoral runs). Bloomberg noted there were many rumors but he had not spoken to Fossella recently, “Congressman Fossella has worked hard for this city. He obviously did something that I think is wrong, and I think he said that he shouldn’t have done it and he thought it was wrong in retrospect.”

#Congressman
#DWI arrest
#love child
#politics
#scandal
#staten island
#Vito Fossella
Do you know the scoop? Comment below or Send us a Tip