Perhaps the most beloved of subway cars, Redbirds were so named for their "Gunn Red" facades, a paint job which, while failing to serve its purpose in deterring graffiti artists, won the hearts of New Yorkers. The Redbird fleet was also the last of the trains with individual metal handholds, a once-iconic fixture that has since been replaced by communal metal bars.

Retired over a decade ago, the last Redbird rode the tracks on a Monday morning, November 3rd, 2003, and was given a heartfelt farewell from subway buffs and transit workers and officials alike. Many came out to ride the train along the 7 line from Times Square to Shea Stadium, and one rider compared the experience to losing a family member.

Once decommissioned, 714 of the cars were submerged into what has become known as Redbird Reef, an artificial reef off the coast of Slaughter Beach, Delaware. (Other subway cars have have also been thrown overboard to create reefs.) 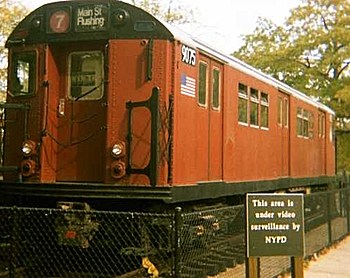 While you can't take a Redbird to work, you can relive a little bit of old New York by paying a visit to Queens Borough Hall in Kew Gardens. Hauled to its stationary plot in 2005, the last Redbird, a refurbished one from the 7 line, sits pleasantly atop fake track, its insides filled not with passengers but a cultural center and museum for not just the car, but the borough it resides in.

Fencing and cameras were added after taggers hit it a week after it was installed, though as the NY Times reported, "Some observers [including court officers] snickered that the act imparted a true authenticity to the Redbird, the classic maroon trains that graffiti writers turned into rolling murals across the city."

The Redbird Tourist Information Center is located at 120-55 Queens Blvd in Kew Gardens.

#redbird
#redbird tourist information center
#original
#subway
#queens
Do you know the scoop? Comment below or Send us a Tip