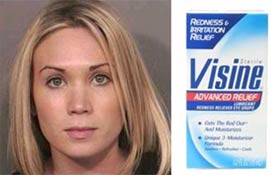 Remember Kristine Anzalone, the Long Island hairdresser who, inspired by Owen Wilson in Wedding Crashers, tried to poison her roommate with Visine? For those just joining us, Anzalone was pregnant and sharing a house with her husband plus a roommate, Joseph Gentissi Jr., in North Bellmore, Long Island back in 2006.

Anzalone came to believe that Gentissi's cigarette smoking was harmful during her pregnancy, so she tried to drive him from the home by serving him iced tea spiked with an unknown amount of Visine. Whatever happened to leaving a dead rat in an unwanted roommate's bed?

Visine contains tetrahydrozoline, a chemical that constricts blood vessels, and Gentissi was soon admitted to the hospital with symptoms that included intestinal distress, vomiting, rectal bleeding, and difficulty breathing. But Gentissi still didn't take the hint, so, while he was away on a business trip, Anzalone allegedly used a metal cane to provoke Gentissi's pit bull into attacking and killing his Chihuahua. Though Anzalone never confessed to instigating the dog-on-dog murder, Gentissi always believed she had a hand in it. And after her friends blabbed about the Visine trick, he went to the cops.

So it all came full-circle yesterday when Anzalone, now divorced, pleaded guilty in exchange for three years of probation. She also has to pay $10,205.20 to cover Gentissi's medical bills, Channel 7 reports. Gentissi tells the Post that he never smoked around Anzalone and insists she was jealous because he'd go out drinking with her husband during her pregnancy, leaving her home alone: "It's not fair. This is a woman who tried to poison me. She should have been charged with attempted murder...She took it as a big joke. She set out to hurt me and she sure did."

#drink
#east rockaway
#Joseph Gentissi Jr.
#Kristine Anzalone
#long island
#visine
Do you know the scoop? Comment below or Send us a Tip
A new Gothamist is coming! We’ve moved comments over to our beta site. Click here to join the conversation and get a preview of our new website.