Police are wondering if two recent, consecutive bodega robberies in Queens were committed by the same robbers whose June crime spree left a bodega owner dead. The Post reports that two Monday night robberies have similar M.O.s to and seem to match descriptions in seventeen other robberies this year: The thieves hit a bodega, threatening employees and customers with guns, demanding cash, and after robbing the store, they head to another one. 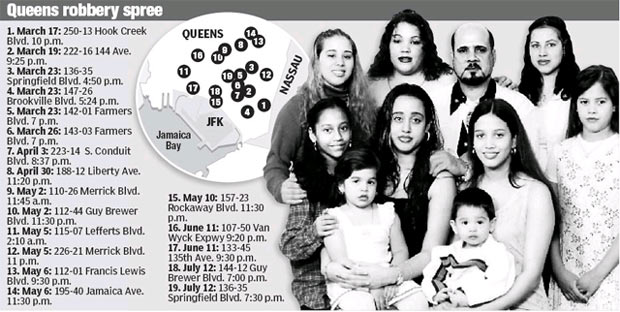 The Post also created a map and legend showing the pattern of robberies. Bodega owners face robberies every day, but ever since South Ozone Park bodega owner Bolivar Cruz (pictured with his family, next to the Post's map) was shot - he held a gun as robbers were "holding two of his daughters at bay" - they have been anxious for the police to find the trio of masked men. One owner who was robbed Monday night told the Post, "This is the third time I've been robbed in a month and a half. I need the police to catch these guys. These guys are bad - they're playing with people's lives. I don't wanna die."

#bodega
#Bolivar Cruz
#crime
#gun
#guns
#ozone park
#people
#police
#queens
#south ozone park
#The Police
#the post
Do you know the scoop? Comment below or Send us a Tip