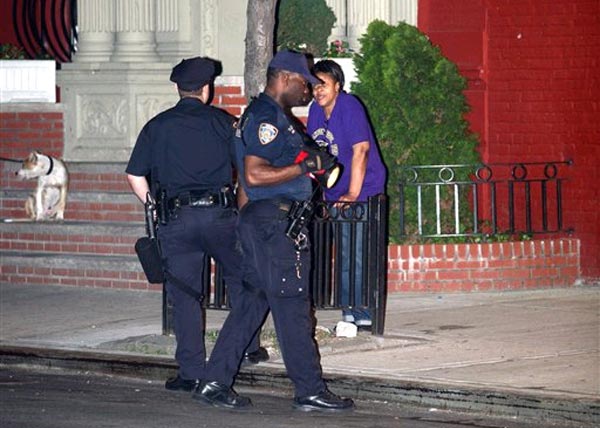 Harlem residents spoke out against the Monday night violence that left 10 people injured. Perfect Peace Ministry's Reverend Vernon William urged the community to come together, "We need to be out here in numbers calling for peace in our community. This type of going on, this type of saying it's alright for people to shoot one another, it's just turned another eye. People are desensitized to the issues of the community. It's just wrong. We cannot just stand on the periphery and just pontificate; we must get involved."

It's now believed that six people were injured in a shooting near a barbecue in Marcus Garvey Park and four others were injured in separate, unrelated incidents. One man was apparently shot because he bumped into someone on the sidewalk. The NY Times has a graphic showing various reports of shootings and accidents ("two gunmen seen firing from a kneeling position" at Lenox and West 125th). A resident said, “It was like the Wild West, and I’m no cowboy."

So far, the police have one 15-year-old teen in custody--he was spotted trying to get rid of a .380 semiautomatic. According to the Daily News, another gunman may be a "a 16-year-old boy busted three weeks ago in the shooting of another teen in a turf war." Harlem resident Jackie Rowe-Adams who founded Harlem Mothers SAVE after her two sons died from gun violence told the Sun, "Guns are flowing like water, and it's like a river here. Years ago the older kids had guns, and now it's the babies."

#crime
#gun violence
#harlem
#shooting
#shootings
Do you know the scoop? Comment below or Send us a Tip