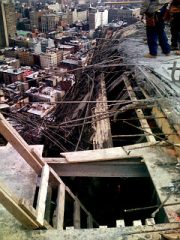 The tragic death of a construction worker at the Trump Soho building has put the spotlight on the spotty history of a contractor on the project. On Monday afternoon, a worker, Yuriy Vanchytskyy (pictured below), fell 42 stories to his death when the molds he and other workers were pouring concrete into broke, causing a collapse into lower floors.

The NY Times notes that another worker, also working for subcontractor DiFama Concrete, died when he fell 60 feet at the site of a Midtown building in 2004. Since then, the Brooklyn-based company has been "repeatedly cited for serious safety violations by the Occupational Safety and Health Administration," with 11 of 17 federal violations being "described as serious."

The Daily News has photographs from the roof (pictured) right after the collapse and reports that the Department of Buildings found the wooden forms "did not meet industry standards." Staffers from the Manhattan DA's office were seen at the building site, 246 Spring Street - apparently DA Robert Morgenthau is monitoring the city's investigation. 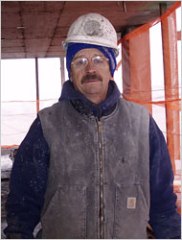 City Councilman Tony Avella slammed Buildings Commissioner Patricia Lancaster. Noting that there were previous violations at the site, Avella said, "It is shameful that despite these violations the DOB [Department of Buildings] allowed this construction to continue and did not issue a stop-work order until this tragic event ... it is time for Lancaster to go."

Because of NYC's rapid development, the Times explains that "contractors routinely pour a new concrete floor every two days at a building site, compared with every four or five days elsewhere." And another interesting stat: 68% of last year's building accidents were from "concrete firms causing material to fall from high-rises under construction."

And Vanchytskyy, a Ukrainian immigrant, was remembered as a good-natured husband and tenant and a good co-worker. A fellow construction worker at the Trump Soho told the Times, “Hard working brother; always smiling; he was happy to be working. Some people come to work grumpy and mad. He wasn’t one of them.”