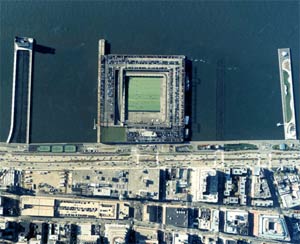 Over the weekend, hundreds rallied for Pier 40's next transformation to be a park. This Thursday, the Hudson River Park Trust is meeting to discuss two existing bids for the pier located off Houston Street, but a more recent plan, from a group of local parents who hope their $120,000 study, has been gaining some recent momentum.

Previously, the Related Companies had proposed an elaborate plan with a Cirque du Soleil theater and restaurants, while the CampGroup suggested a plan with a recreation center and day camp component. The upstart plan from Pier 40 Partnership included a much higher estimate of building out the pier plus maintaining green space and offering space to schools and artist studios.

The Pier 40 Partnership thinks Related's plan is too intense, tourist-dominated (as in, not enough park), and subject to long delays, while Camp Group's plan is dependent on whether the day camp is financially viable (P40P would be a non-profit conservancy, using tax-free bonds). Last week, a letter from Merrill Lynch was disclosed, showing that the investment bank is "bullish" on the P40P plan. And among the fans of the P40P plan is chef Mario Batali, who told the crowd on Saturday, "We do not need a megacommunity space. What we really need is great, open space."

Pier 40 was built in 1963, as a commercial shipping pier, but in recent years has been a destination for its playing fields. The Hudson River Park Trust can decide which plan to go forward with, but the plans must maintain the same amount of park space.

Update: Here's video from the rally: