On November 25, 2006, groom-to-be Sean Bell and his friends were leaving the Kalua nightclub in Queens when undercover police confronted them. In the confusion that ensued (the police thinking the men were armed or were going to the car to retrieve a gun, uncertainty over whether the police identified themselves leading Bell and his friends to think they were being carjacked) five undercover cops fired 50 times at Bell's car. His friends Joseph Guzman and Trent Benefield were wounded and Bell, who was to be married the next day, was killed, and the episode raised questions about the police undercover tactics and police-community relations and brought up bitter memories of the Amamdou Diallo shooting.

Now a year later, Bell's friends, family, politicians, and other members of the community are getting ready for an overnight vigil. Bell's fiancee, Nicole Paultre-Bell, spoke to the Daily News about her two daughters, 4-year-old Jada and 1-year-old Jordan, with Bell and said, "I just keep asking myself, 'Why does it have to be my children? Why me? Why do we have to be the ones to go through this?' I have to try to make it better for [them].... I pray all the time, 'God give me the strength to get through this.'" 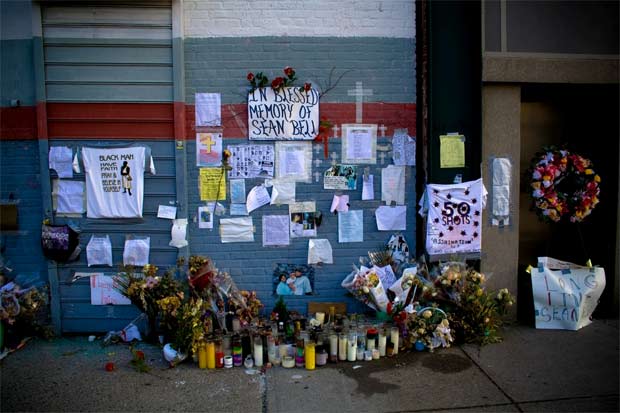 Three of the five police officers were indicted in the shooting earlier this year; the trial has been postponed until next February. Paultre-Bell told the Flushing Times-Ledger that the police still hadn't contacted her to express their condolences about the shooting (perhaps there's a liability issue?) but emphasized she harbored no ill will towards the NYPD; last year, she told Larry King she was trying to be strong, not angry. The Queens DA's office helped retrieve what would have been her and Bell's wedding rings from his car; a Queens judge allowed her to add "Bell" to her name.

The vigil will be at Liverpool Street in Jamaica, Queens, where the shooting occurred, between 10:30PM and 5AM the next morning, with a church service at 6AM. The Reverend Al Sharpton will be delivering a sermon.

Past posts on the the Sean Bell shooting and aftermath are here; some notable posts are about the preliminary police report, accusations of witness intimidation, the December protest, NYPD claims that Bell was drunk, videos of shots seen in the Air Train station, grand jury information. And almost two weeks ago, the police shot 20 times at an unarmed mentally ill teen.